Access to clean drinking water is a basic human need and a prerequisite to improving living and health standards. Aspects related to water, sanitation and hygiene have a direct bearing on a child’s education. Children are unable to reach their full potential in education, sports and aesthetic pursuits in an environment which lacks these basic needs.

Schools play a major role in advocating good hygiene, habits, practises and shaping the future of children. Unfortunately some children from low-income families in rural areas of Sri Lanka are deprived of these facilities due to lack of funding. Although clean water and sanitation in schools are increasingly recognized as fundamental needs for promoting good hygiene and children’s well-being, many schools have very poor facilities. Education suffers when sick children miss school.

It is in this backdrop that SriLankan Cares, the community development arm of SriLankan Airlines together with Gymnasium Isernhagen, a school on the outskirts of Hannover in Germany embarked on a joint charity project to donate a Reverse Osmosis Drinking Water Filtration System to the children at Kekuluwela Maha Vidyalaya, in Aralaganwila.

Manfred Möller accompanied by his young colleague Florian Jorke, arrived in Sri Lanka on March 12 with 30 students from Gymnasium Isernhagen, Germany. Twenty two of those students are members of the "Sri Lanka AG", a group that forms the charity group and has had different projects in Sri Lanka since 1995. They were staying with families in Negombo. Other students take part in a school exchange programme with S. Thomas’ College (STC), Mount Lavinia and Ladies’  College (LC), Colombo.

Manfred had been visiting Sri Lanka even during the war with groups of students in spite of warnings by some quarters.

This meaningful project which makes a significant difference to the lives of hundreds of children in Kekuluwela was estimated at a cost around Rs. 775,000, and was funded by the Gymnasium Isernhagen School on the recommendation of SriLankan Airlines office in Frankfurt.

The project also saw a donation of sports equipment and musical instruments to Kekuluwela Maha Vidyalaya as sports and quality recreational activities is an integral part of the total education of every child.

Kekuluwela Maha Vidyalaya is situated in Aralaganwila, Dimbulagala about 250 Km away from Colombo. Aralaganwila is a rural farming community of about 100,000 persons that once faced untold hardships due to the sporadic terrorist attacks. 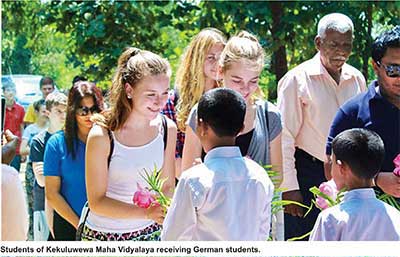