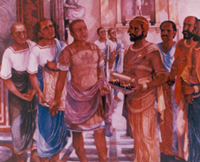 Sri Lanka was ruled by Kings from ancient times as far back as the 3rd century B.C spanning over 2.500 years as recorded history depicts. Recent excavations show that even during the Neolithic Age, there were food gatherers and rice cultivators in Sri Lanka. Very little is known of this period; documented history began with the arrival of the Aryans from North India. The Aryans introduced the use of iron and an advanced form of agriculture and irrigation. They also introduced the art of government. Of the Aryan settlements, Anuradhapura grew into a powerful kingdom under the rule of king Pandukabhaya. According to traditional history he is accepted as the founder of Anuradhapura.

During the reign of King Devanampiya Tissa, a descendent of Pandukabhaya, Buddhísm was introduced in 247 B.C. by Arahat Mahinda, son of Emperor Asoka of India. This can be seen as one of the milestones in the history of Sri Lanka. When the new civilisation blossomed, Sri Lanka became a culturally high ranking and well founded state.

In the mid 2nd century B.C. a large part of north Sri Lanka came under the rule of an invader from South India. From the beginning of the Christian era and up to the end of the 4th century A.D. Sri Lanka was governed by an unbroken dynasty called Lambakarna, which paid great attention to the development of irrigation. A great king of this dynasty, Mahasen (3rd century A.D.) started the construction of large `tanks' or irrigation reservoirs. Another great `tank' builder was Dhatusena, who was put to death by his son Kasyapa who made Sigiriya a royal city with his fortress capital on he summit of the rock.

As a result of invasions from South India the kingdom of Anuradhapura fell by the end of the 10th century A.D. Vijayabahu 1 repulsed the invaders and established his capital at Polonnaruwa in the 11th century A.D. Other great kings of Polonnaruwa were Parakrama Bahu the Great and Nissanka Malla both of whom adorned the city with numerous buildings of architectural beauty.

Invasion was intermittent and the capital was moved constantly until the Portuguese arrived in 1505, when the chief city was established at Kotte, in the western lowlands. The Portuguese came to trade in spices but stayed to rule until 1656 in the coastal regions, as did the Dutch thereafter. Dutch rule lasted from 1656 to 1796, in which year they were displaced by the British. During this period the highland Kingdom, with its capital in Kandy, retained its independence despite repeated assaults by foreign powers who ruled the rest of the country. In 1815 the kingdom of Kandy was ceded to the British and thus they established their rule over the whole island. 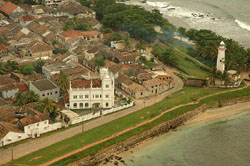 The British colony, called Ceylon, gained independence in 1948. The newly independent nation retained the name Ceylon until the 1972 constitution renamed it Sri Lanka. Since independence Sri Lanka has maintained a democratic, multi-party system of government. Modern communications, western medical services, education in English, as well as the plantation industry (first coffee then tea, rubber and coconut) developed during British rule.By a process of peaceful, constitutional evolution, Sri Lanka won back her independence in 1948 and is now a sovereign republic, with membership in the Commonwealth of Nations and the United Nations Organization.

A civil war erupted in 1983 between the government forces and Tamil separatists movements in the North-East. In February 2002, after nearly two decades, a ceasefire agreement was signed between the government and the Liberation Tigers of Tamil Ealam (LTTE), the major Tamil separatist movement who, after signing the agreement, renounced the claim for a separate state and agreed to settle for a federal solution. Due to regular violations of the ceasefire by the Tamil Tigers and the apparent unwillingness of the Tigers to find a solution of the ethnic problem in Sri Lanka, the government cancelled the ceasefire agreement in 2008 and started its humanitarian operation for the liberation of the North and East from the terrorism of the Tamil Tigers, which was concluded in May of 2009. Since then, reconstruction and reconciliation on the island is under way.