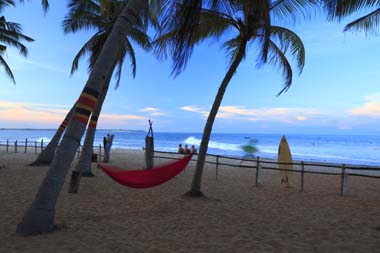 Berlin / Colombo, March 6th 2013: With its unique diversity, Sri Lanka is still continuing to boom. Thus the bookings in 2012 increased over an impressive 17.5 percent compared to the previous year. A total of 1,055,605 tourists visited the island in the Indian Ocean between January and December. With 373,063 visitors (up 18.4 percent), tourists from the EU countries made the majority.

Besides the British, the Germans especially love the destination, which perfectly combines bathing, culture, nature and wellness. Sri Lanka is presenting the extremely varied tourism offers at ITB 2013 and shows its excellent value for reasonable prices for the source market Germany.

Until the end of 2012 a total of 71,642 Germans visited the island nation which is just as big as Bavaria, but combines all the facets of Asia. Thus, the number of German guests from the previous year increased to 15,660 (up 28.2 percent). For 2013, the Ministry of Tourism in Colombo expects at least 89,000 (up 25 percent) German guests. The total number of visitors is expected to increase by another 25 percent to around 1.3 million tourists.

Sri Lanka is known worldwide as the island with the greatest diversity - both in terms of species richness, as well as the cultural heritage. 15 national parks and eight UNESCO World Heritage sites are to be found on 65,000 square kilometers. Besides palm-fringed sandy beaches of a total length of 1,340 km, pristine rainforests and great surfing and diving spots are waiting. The whole beauty of the island can be seen on train rides through picturesque mountain sceneries. Based upon its past as a British colony, the island offers an exquisite tea culture. Healing and wellness treatments are part of the tradition on Sri Lanka; the country is considered the cradle of Ayurveda, which in combination with yoga emerged to a unique form of well-being.

Rumy Jauffer, Managing Director of the Sri Lanka Tourism Promotion Bureau therefore predicts a bright future for the tourist destination, especially since the infrastructure initiative is progressing as planned: "The expansion of the road network is in full swing. The capacity of Colombo Airport has increased so that many new connections are now available. "The restorations in the historic heart of Colombo and Jaffna in the northeast are also well advancing. Especially on the east coast around the beaches in Pottuvil, Trincomalee, Kalkudah, Psasekudah and Batticaloa, many new resorts and restaurants have emerged. Another positive development is that more international hotel brands are discovering Sri Lanka as a market.

The expansion of the destination should continue to develop according to the strict standards of environmental sustainability. Rumy Jauffer is committed to high quality "tourism in harmony with nature", as it is reflected on the island with numerous eco-resorts amidst magnificent tropical landscapes. German tourists specifically have a very high consciousness for the environment and good quality, says Rumy Jauffer. Sri Lanka wants to continue meeting these wishes with appropriate offers.