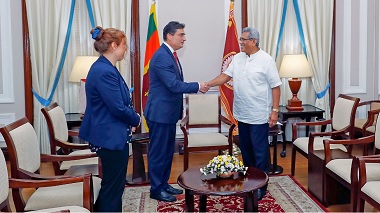 Hanspeter Mock, Ambassador of Switzerland in Sri Lanka called on President Gotabaya Rajapaksa at the Presidential Secretariat this morning (16).

Conveying warm congratulations to the President over his recent election victory on his and his government’s behalf, the Ambassador said that he especially appreciated President Rajapaksa’s remark that “he is the President of all Sri Lankans”. “Switzerland is happy that traditional relations with Sri Lanka remain strong and mutually beneficial”.

Focusing his attention on recent incident involving a locally recruited official of the Swiss Embassy, Mr. MOCK stressed that Switzerland harboured no intention to do any harm to Sri Lanka.

“We wish to work together for the benefit of both countries. Also we need to overcome this situation of tension and to remove any misunderstanding,” the Swiss Ambassador said.

In response President Rajapaksa explained to the Ambassador the progress of investigations in to the incident so far. “It is very well established by now that the alleged abduction is a total fabrication. Irrefutable evidence such as Uber reports, telephone conversations and CCTV footages point to this fact. The Embassy official must have been compelled by some interested parties to bring myself and my government in to disrepute. It is not clear why the alleged victims acted in such a manner,” President observed.

President Rajapaksa said that he saw no wrong in the initial reaction by the Swiss Embassy when this incident was first reported. “It is justifiable. If a member of its staff is in trouble, the Embassy has to intervene”.

President requested the Ambassador to cooperate with the government to conduct the investigation to its end so that the truth would be emerged.

Find the full press release on the website of the Presidential Secretariat under http://www.president.gov.lk/switzerland-assures-continuous-support-to-sri-lanka/