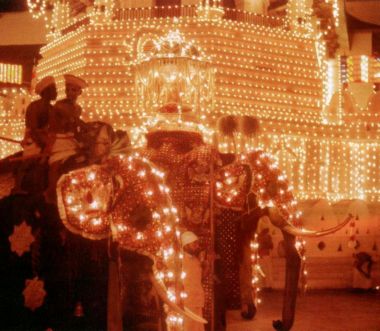 Sri Lanka’s biggest treasure lies just before the doorstep: the Indian Ocean. In the morning, it resembles a well-polished silver mirror; at midday, the sun lets thousands of diamonds sparkle; at night, the sea gives the impression of being a dark-blue blanket made of precious velvet. Sri Lanka has a total of 1340 km of beaches. Especially in the south, one paradise is located next to each other. Rekawa Beach is one of them: gold-coloured fine sand, palm trees that move with the light breeze and only a few tourists—here you can find the ultimate relaxation from the stress of everyday life. You cannot only enjoy sun, sand and waves in the Weligama Bay, but also a peculiarity of Sri Lanka: the stilt fishing. Almost motionless the fishermen sit on long wooden poles at the beach and wait until flood brings their catch to them. Stilt fishing belongs to the traditional image of Sri Lanka as do elephants, which are venerated on the island state for their wisdom and strength. The closest you can get to them is in the Yala National Park in the southeast of the country.

There, you cannot only marvel at the imposing elephants: also monkeys, water buffaloes, wild boars or huge squirrels feel at home on the huge grassland with its thickets and rock landscapes. What is more, the normally so shy leopard shows up uninhibitedly in Sri Lanka. The biodiversity of the animals living here together with its fantastic beaches are the biggest draws to Sri Lanka. To this the thousands of years old culture has to be added. In the middle of the island, which is about the size of the German federal state Bavaria, lies Kandy. The city is part of the so-called “cultural triangle”, to which the towns Polonnaruwa and Anuradhapura belong. They all bewitch the visitor with their cultural heritage sites.

Especially Kandy is a must for all who are interested in the history and myths of the country. The architecture alone of this former royal city is worth a visit: a curious mixture of colonial buildings, Indian influences and Chinese pretentiousness mark the view of the city and give testimony of the different cultures that left their traces in Sri Lanka. The city of Kandy, however, is known for its temples. The most famous: Sri Dalada Maligawa. The holiest relic of the country is kept here, a canine tooth of Lord Buddha. Pilgrims have the possibility to see this wonder three times a day or to be more precise: the golden container in which Buddha’s tooth is kept. Every year in July and August, the temple is at the centre of magnificent processions with adorned elephants, dancers and musicians. This spectacle, which captivates thousands of visitors, goes approximately on for two weeks.

In the capital Colombo, the visitor finds a world of contrasts. Tourist strolling through the streets, locals are running their errands and Buddhist monks in their orange dresses walk around unimpressed by the hectic surrounding them.

Between them all, the drivers of tuk-tuks, as the motor-driven tricycles are called here, are engaging in neck-breaking races through the small streets. The drivers stop sometimes in order to enjoy a cup of tea, a few fresh fruits or fried crab biscuits, which are offered at many street corners in Colombo and which you should definitely try. For instance, in the Pettah, one of the oldest parts of Colombo.

You can embark on an especially interesting trip from the capital’s main station: by train. Those among you who appreciate a bit of comfort should take the so-called Observation Saloon. This is an extra carriage with a panoramic window offering a wonderful view of the passing by landscape. Travel time from Colombo to Habarane in central Sri Lanka is about two hours. The nature past during the trip is fabulous. Those, however, who want to travel from Sri Lanka’s well-developed south and southwest to the north and east of the island should rent a car. The east of the island is regarded as an insider’s tip for all tourists who want to experience a real Robinson holiday: secluded beaches, simple accommodation and great hospitality are characteristic for this region.

Luxury resorts as The Fortress, the Bentota Beach or the Jetwing Lagoon can be found mainly in the south. Many hotels in Sri Lanka offer apart from their first-class comfort also unique spas: Ayurveda treatments that have been part of Sri Lanka’s culture since about 500 BC and have not lost their healing power until today.