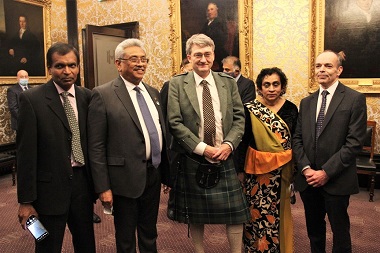 The Foreign Ministry of Sri Lanka organized an event „Rediscovering Nitrogen: Solution synergies for climate change, health, biodiversity and circular economy’ together with the International Nitrogen Management System (INMS), focused on the nexus between climate and nitrogen waste, ahead of COP-26, on the evening of 31 October 2021 in Glasgow.

The phrase „Rediscovering Nitrogen‟ is used as Nitrogen was discovered in 1772 by scientist Daniel Rutherford in Scotland. The event discussed how action on nitrogen is a necessary next step to help meet climate goals with multiple co-benefits for the environment, health and the economy.

High-level statements from the President of Sri Lanka, UK Government, UNEP, the Commonwealth, Director General of the South Asia Cooperative Environment Programme (SACEP) and others discussed options for action ahead of COP-26. The event launched the #Nitrogen4NetZero proposal for COP-26 brought forward by SACEP reflecting work with its member countries.

It further focused on Sri Lanka‟s progressive climate ambitions as depicted through its updated and ambitious NDCs already submitted to the UNFCCC mechanism, including Sri Lanka‟s road map for de- carbonization by 2050, achieving 70% renewable energy target by 2030, a landmark decision on no new coal plants and pioneering work on mangrove restoration and conservation. The opportunities for FDI, particularly for green industries and tourism on the country‟s journey towards implementing the NDCs was also shared at this event.

The event was chaired by Chief Scientific Advisor for Scotland and Scientific Director of Moredun Research Institute Prof. Julie Fitzpatrick. The Minister of Environment Mahinda Amaraweera delivered the welcome address, followed by introductory remarks by Professor Mark Sutton. Professor Sutton stressed on the importance of halving nitrogen waste under the Colombo Declaration, which would save us an amount of 100 billion USD per annum.

The Keynote address was delivered by President Gotabaya Rajapaksam, who emphasized that "The challenge facing us now is to use modern scientific techniques and practices to enhance agricultural production without causing environmental degradation. We require a new agricultural revolution that has sustainability at its core.” The President further stated that “... Sri Lanka especially welcomes investments into renewable energy as well as organic agriculture and is prepared to support their success through incentives and appropriate policy interventions. I therefore hope that greater cooperation in this regard will be forthcoming in the future."

Unfortunately, Minister for South Asia, the United Nations and the Commonwealth at the Foreign, Commonwealth & Development Office (FCDO) UK Lord Ahmad of Wimbledon was unable to attend the event, due to a train accident that occurred on the 31 October 2021. His speech was delivered by UK‟s Regional COP-26 Ambassador for Asia Pacific Ambassador Ken O‟Flaherty. Delivering the speech on behalf of Lord Ahmad, Ambassador O‟Flaherty reiterated the importance of raising awareness of the impact that nitrogen pollution has on the climate, the environment, and our health. He further elaborated on "The need for global action, to protect our planet for future generation has never been so urgent and the UK has played a leading role among developed countries in cutting carbon emissions”. The UK‟s stride to legislate for net zero emissions by 2050 was highlighted in his speech, as UK was the first major economy to do so and to set in law the world‟s most ambitious climate change target, cutting emissions by 78% by 2035.

Urmi Goswami of the Economic Times of India and Professor Sutton had a two-way conversation titled "Why Nitrogen?” as part of the programme for the evening. The discussion emphasized the direct Global Warming Potential (mass basis) of GHG Nitrous Oxide (N2O), which is 296 times greater than Carbon Dioxide (CO2), during a time period of 100 years. The reduction of Nitrous Oxide emissions will be essential if the world is to achieve net zero GHG emissions.

Among other prominent attendees were the President of Maldives Ibrahim Mohamed Solih and Secretary of Foreign Affairs of the Republic of Philippines, Teodoro Jr. Locsin. Over 90 attendees representing national delegations, the British Government, private sector personnel from the business and finance industry and academics were present.

The Baroness Scotland of Asthal, Secretary General of the Commonwealth, the Rt. Patricia Scotland reminded the audience that “... Sri Lanka has been on this journey with the Commonwealth with fifty-four countries representing 2.5 billion people...”. She added further that “If you regrettably go back, and look at that declaration, all the worries of this being an existential threat was there and Sri Lanka was leading then, and Sri Lanka is still leading now.” She commended both the President of Sri Lanka and the President of the Maldives for having shown that they are not interested in just talking but that they are totally committed to doing. She went on to assure that the Commonwealth Secretariat‟s support in the implementation process and developing an implementation tool-kit. She emphasized the pertinent need to understand the connections between mangroves and nitrogen and welcomed Sri Lanka to join forces again with the Commonwealth Secretariat in developing appropriate mechanisms.

Secretary to the Ministry of Environment Dr. Anil Jasinghe announced “... that the Government of Sri Lanka submitted a fresh value-added Resolution on Sustainable Nitrogen Management on the 26 October, proposing more comprehensive actions beyond the UNEA 4/14 Resolution of 2019.” He further added that as the year 2030 is fast approaching, Sri Lanka introduced several new elements in the proposed resolution, as highlighted in the Colombo Declaration. This new resolution will lay the foundation for action on nitrogen for climate coordinating all related Multilateral Environment Agreements via the Inter-convention Nitrogen Coordination Mechanism.

Delivering concluding remarks, Foreign Minister Prof. G. L. Peiris emphasized that Sri Lanka is ideally equipped to play a pioneering role in global initiatives with regard to climate change and biodiversity. He stated that "... we in Sri Lanka have never believed for one moment, that there is any conflict between economic development on the one hand and the preservation of the environment on the other. these two aspects go together. They are complimentary, they are two sides of the same coin.” He reiterated that the President Gotabaya Rajapaksa made a bold decision to move from chemical fertilizer to organic fertilizer, which is having a profound impact on all agricultural activity in Sri Lanka. The shift would entail in less pollution of water and soil and thereby polluting the oceans less, with an overall positive impact on the health of the population of the country.

Referring to the comments of Baroness Patricia Scotland, conveying the critical message of implementation as opposed to aspiration, Professor Peiris went on to state that “... This is because we do not have the luxury of time. Lofty aspirations and plans for the future are not sufficient. What is urgently required is immediate implementation. The Foreign Minister assured the audience that Sri Lanka is far from being politically indifferent, and that ours is an attitude of intense commitment and rigorous involvement. He assured the international community that Sri Lanka will always be a resolute and steadfast partner in all efforts directed towards the preservation of the environment and much more, for the very survival of this planet for the benefit of generations to come.