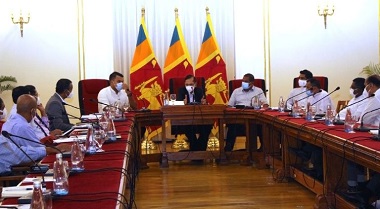 At the outset, Foreign Minister Peiris emphasized the urgent need to enhance the current level of digitalization of consular services at the Ministry in order to facilitate expeditious delivery of services to the public.. Minister Namal Rajapaksa outlined the government’s digitalization National Plan and stated that the government intended to issue by 2023, a digital national identity number with biometrics. This digital identity number would be specific to every citizen and would be applicable from the birth certificate to the death certificate and connected to different areas of a citizen's activity such as, among others, the bank account, tax file, insurance, passport and school admission. Therefore, Minister Namal Rajapaksa stated it was imperative that supporting institutions are also digitalized and on a par with this process.

Given that a large number of the Sri Lankan public avail themselves of the consular services of the Foreign Ministry, it was agreed that the current Electronic Document Attestation System (e-DAS), used by the Consular Division of the Foreign Ministry needed to be urgently upgraded, or a new system introduced. The aim would be to digitally integrate the Consular Division with other institutions such as the Police Department, Registrar General’s Department and the Department of Examinations, to facilitate foreign employment through SLBFE and its agents.

Chairman, Information and Communication Technology Agency (ICTA) Oshada Senanayake stated that this issue needed to be approached in a holistic manner and solutions mapped from a citizen’s point of view taking into consideration that a large number of service seekers come from rural areas. Therefore, there was an imperative need to avoid the physical presence of the service seekers as much as possible. The ways and means to operationalize a single payment gateway was also discussed. It was decided to appoint an inter-agency committee to develop a modus operandi to implement this process by the second quarter of next year.

Senior officials of the Foreign Ministry, Sri Lanka Bureau of Foreign Employment and the ICTA took part in the discussion.