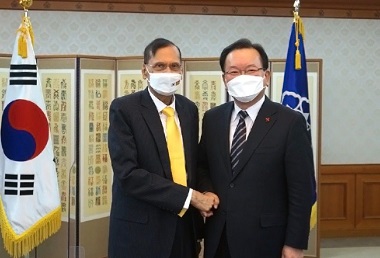 During his courtesy call on Prime Minister of the Republic of Korea, Foreign Minister Prof. G. L. Peiris raised the issue of increased employment opportunities in ROK for Sri Lankan workers.

Minister Peiris said that, at present, there are about 22,000 Sri Lankan workers in South Korea, sending back to our country each year approximately 520 million U.S. Dollars. While the return of Sri Lankan workers to South Korea had been suspended because of COVID 19, Minister Peiris thanked the ROK Government for permitting their return in stages, initially returning workers and, thereafter, new entrants. He said that two batches had arrived in Seoul from Sri Lanka, the first on 08 December and the second on 22 December. He requested expanded opportunities for Sri Lankan workers in terms of the EPS scheme, and pointed out that, for all record purposes, Sri Lankan Airlines is the only national carrier which operates directly to Seoul on a weekly basis out of the 16 labour sending countries.

He stressed that less than 80 Sri Lankan workers in the entire ROK had ever contracted COVID 19, thus manifesting the effectiveness of health measures adopted in Sri Lanka. He requested that the number in each batch admitted to ROK should be increased, and also the frequency of arrival of successive batches in Seoul.

Minister Prof. Peiris underscored the fact that, in 1970, the total exports out of ROK had been approximately USD 835 million, while in 2019, in less than five decades the value of ROK exports had risen to US Dollars 610 billion. This represented a phenomenal increase, with few parallels in any part of the world. Minister Prof. Peiris said that the industry, commitment and discipline of Sri Lankan workers contributed in some measure to this achievement.

Political issues, as well as trade, investment and tourism, and cooperation in international fora were among the other topics discussed at the meeting between the Prime Minister of the Republic of Korea and the Foreign Minister of Sri Lanka.