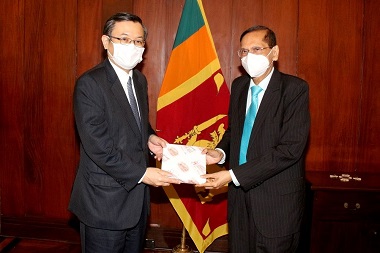 Minister Peiris further informed that Japan has been a true friend of Sri Lanka throughout its difficult times, and commented Ambassador Sugiyamas dedicated efforts in providing support to Sri Lanka to overcome the challengers posed by the Covid-19-pandemic. The people of Sri Lanka will never forget the contribution of Japan in upgrading the livelihoods of people in this country under the Japanese development assistance, especially in the areas of agriculture, irrigation, drinking water and road development. He also noted that Japanese assistance has always been based on the true needs of the country and never came with attached precondition.

Commenting on the human rights issues, Foreign Minister thanked the government of Japan for their consistency in understanding the ground realities in Sri Lanka and constructive engagements with Sri Lanka and the international partners in finding amicable solutions to the prevailing issues. He acknowledged Ambassador Sugiyama’s active partnership in this regard during his tenure in Sri Lanka.

Ambassador Sugiyama thanked the Foreign Minister and the government of Sri Lanka for providing unconditional and unrestricted access to all stakeholders in Sri Lanka in delivering his official mandate to his hig hest satisfaction. The Ambassador expressed his confidence that next year, when both countries celebrate the 70th anniversary of diplomatic relations, would be a fitting occasion to enhance existing Sri Lanka - Japan comprehensive partnership to a further height. Minister Peiris congratulated and extended his best wishes to Ambassador Sugiyama, who will be taking up a senior position in the Foreign Ministry of Japan. Ambassador Sugiyama has served as the Japanese Ambassador to Sri Lanka for three years since November 2018.