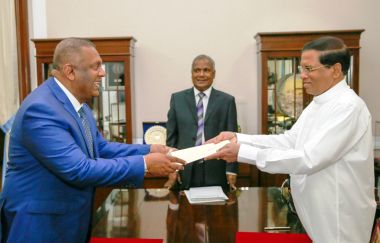 Hon. Mangala Samaraweera MP was appointed today as Sri Lanka’s Foreign Minister. Taking oaths in the presence of President Maithripala Sirisena at the Presidential Secretariat, he re-affirmed his commitment to “faithfully perform the duties and discharge the functions of the office of the Minister of Foreign Affairs in accordance with the Constitution”.

This is the third time Minister Samaraweera will hold the portfolio, having held it for the first time between November 2005 and January 2007, and for the second time between January 2015 and August 2015.

After the ceremony, Minister Samaraweera said that he would “build, with even greater vigour, on the tremendous goodwill the international community extended to Sri Lanka after the January 8 revolution”, adding that, “this intensification of engagement and strengthening of relations will be made possible by the political stability arising from the decisive mandate given by the people in the general election”.

He said that he would “place economic diplomacy at the centre of Sri Lanka’s foreign affairs - focusing on promoting trade, tourism and investment”. Minister Samaraweera also noted that “restructuring the Foreign Ministry and the rationalization of Sri Lanka’s diplomatic missions abroad was an urgent priority”.