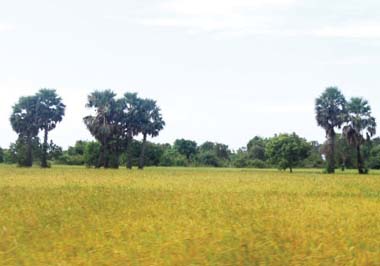 Both sectors are slowly picking up after the end of the war, which has paved the path for development. When it comes to agriculture and farming, the farmers were faced with challenges to carry on their livelihoods as the security situation deteriorated. In the latter stages of the war, farmers had a huge role to play in the peninsula.

The closure of the A9, the only route connecting the peninsula, happened in August 2006 due to clashes at the Muhamalai entry exit point, cutting off the entire peninsula and leaving residents helpless.

However, the post war situation has provided a platform for the farmers to cultivate their products and market them without many issues. "We had problems cultivating during the war due to various reasons. Even the ceasefire period didn't help us regarding transporting owing to security procedures," said a farmer in Jaffna. He said marketing crops was the most challenging aspect during, and soon after the war. "Our market was limited. We were forced to sell our products within the peninsula. But today we have access to the entire country and therefore, have widened the market," he said.

Even the storehouses in Jaffna seem to have benefited by peace. "Our stock was very limited. Therefore, we had to be very careful in distributing rice," said Jegan, a wholesale rice dealer in Jaffna.

However, the recent drought has had an impact on agriculture production. Government officials said cultivation in the North had been very low owing to the absence of monsoonal rains. Farmers point out that there had been very little or no rainfall since early this year, which has affected the entire season. Officials said they were planning on measures that could be taken to assist the farmers who have been affected due to the prevalent drought.

The fisheries industry in the peninsula has made constant improvement over the past three years. Fishermen, whose boats, nets, and other equipments were destroyed or taken away by the LTTE, have been provided with equipment and facilities to continue their livelihoods without hindrance. During the war, fishermen were restricted from fishing in deep seas due to security threats. In addition, the LTTE used the sea route to get all its supplies, and therefore, the Navy was forced to restrict fisherman's movements.

"Our catch has improved as we can now move into the deep seas," said Arul, a fisherman. He said their market too, had increased considerably. "We had issues in transporting our catch to other parts of the country. We also did not have proper storage facilities to keep the fish fresh. Now we have got them. This has allowed us to develop ourselves and our families," he said.

Despite such progresses, the fisheries sector in the peninsula has been facing problems due to the encroachment of Indian trawlers into Sri Lankan waters. This issue has caused a considerable threat to local fishermen. "The problems at mid sea have to be solved. Our security is important," he said. The government has already taken steps to address the issue through negotiations with the Indian officials.

Rs. 82.3 Mn. has been invested to construct 24 community buildings, 48 multi-purpose buildings and one playground benefiting 100,000 families. Two pre-school buildings and a healthcare centre were reconstructed at a cost of Rs. 1 Mn. (Ministry of Economic Development)