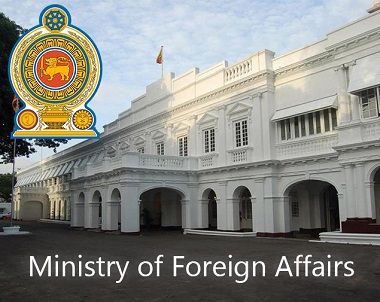 In an era where humanity is threatened with inter-state conflicts, intra-state frictions, asymmetrical threats posed by non-state actors, natural disasters, health related issues and a variety of other challenges, Sri Lanka appreciates Germany’s efforts to initiate discussion on the timely subject of “Peace Operations and Human Rights”. My delegation wishes Germany every success as President of the Security Council for the month of July and is confident that it will be a productive tenure.

Sri Lanka takes this opportunity to honor the thousands of men and women who for decades helped countries navigate the difficult path from conflict to peace by providing security and peacebuilding support under the Blue Helmet. Sri Lanka is proud to have a long association with United Nations Peacekeeping Operations, having served as a member of the 1956 Advisory Committee that led to the establishment of the first “classical” peacekeeping mission – UNEF 1, deployed during the Suez crisis and later deployed UN Peacekeepers to the UN Mission in the Democratic Republic of Congo (MONUC) in 1960.

With consistent effort, a wealth of experience and expertise gathered across diverse scenarios, the United Nations Peace Operations (UNPO) have become a vital- credible, dependable and versatile global instrument to ensure human security in conflict situations. The significance of the current Peace Operations are such that, considering the magnitudes of violence and their frequency of manifestation, it would be hard to visualize the destiny of human lives in some of the conflict zones in the absence of assistance by the United Nations.

Human Rights remain an important element for UNPO. Several PKOs such as MONUSCO, MINUSCA, MINUSMA, UNAMID, UNMISS have integrated human rights components, as well as Special Political Missions such as UNAMI, UNSMIL, UNSOM, UNAMA and BINUH, to identify a few. This is crucial across a wide spectrum of missions and strengthens the Missions’ credibility. Sri Lanka remains fully committed to UN Peacekeeping and upholding human rights, and in this context has taken a number of measures to ensure that all Sri Lankan Peacekeepers are suitably trained and fully equipped with theoretical knowledge and practical application of all necessary functions of peacekeeping, including the promotion and protection of human rights. Towards this end, a comprehensive package of education and training on relevant subjects are included in the pre-deployment training courses and continuity is maintained during the deployment by way of in-mission training, conducted in consultation with UN authorities. In addition, human rights has been included as part of the training of security forces and police in Sri Lanka. At the premier degree awarding tertiary institution established for military personnel, the Kotalawala Defence University, where many military cadets pursue degree programmes, human rights is taught as an important component of the academic programme. The Human Rights Commission of Sri Lanka and the ICRC also conduct a number of training programmes for the Military and the Police on human rights and international humanitarian law.

It is observed that Peace Operations are becoming progressively complex in nature, with diverse socio-political challenges with increased impact on civilians as a result of direct and indirect actions of parties to conflicts. Sri Lanka has endorsed the Kigali Principles on the Protection of Civilians.

Violations of human rights in most conflict affected communities, disproportionately affect women and children. In situations of heightened violence and insecurity, as one of the most vulnerable segments of the population, they may experience such violations from within the family itself, in addition to existing discrimination in society. As such, it is vital to be sensitive to issues of gender in looking at human rights.

In a number of missions, women protection advisers are responsible for monitoring, analyzing and reporting on conflict-related sexual violence (CRSV). Whilst assuring Sri Lanka’s continuous commitment to enhance the participation of women in Peacekeeping operations, it is emphasized that focusing on education and capacity building of women should be considered a priority task to achieve meaningful gender parity as a long-term solution to this issue.

The COVID-19 pandemic has significantly impacted the human rights situation, particularly in territories affected by conflict. Travel related restrictions and limitations enforced on human interactions have generated negative effects across the spectrum, ranging from difficulties in delivering humanitarian assistance to the provision of protection for vulnerable communities. Diversion of resources from funds allocated for UN field missions for humanitarian assistance to the pandemic mitigation effort would weaken capacities of peacekeeping missions in protecting civilians.

It is pertinent to mention that credibility of institutions that promote the adherence to and protection of human rights can be significantly undermined when they are unduly politicized. There have been instances where unproven allegations of human rights violations were used as instruments to unduly pressurize and manipulate contributions to peacekeeping by governments for undue political gains. Sri Lanka firmly believes that, the United Nations as the largest global body that is committed to ensure the rights of every human being, should always remain impartial whilst fully respecting the principle of sovereign equality in its all interactions with member states.

The ever-changing dynamics of present armed conflicts and their rapid evolution makes the protection of human rights of vulnerable communities as a recurring task which is becoming increasingly challenging. In this context, the UN peacekeeping operations should remain a collective endeavor in ensuring the protection of vulnerable communities, and it is essential that there is engagement and interaction with various stakeholders, including civil society and the wider population. This is also vital to build trust with local communities, where UN´Peacekeeping Missions operate. Protecting civilians and upholding human rights are vital for the success of a UNPKO and shapes how a population will remember the Peacekeepers and reflects the manner in which the United Nations will be evaluated.

Having engaged in a humanitarian struggle with a terrorist organization that used human shields, suicide bombers and child soldiers, Sri Lanka’s armed forces and Police have been sharing expertise in handling difficult and complex terrains of the humanitarian engagement field in difficult areas of the world. Whilst acknowledging and commending the effort by the UN Secretariat and the Department of Peace Operations on their dedicated effort in promoting the human rights of communities undergoing hardships in conflict affected territories, Sri Lanka reiterates its full commitment to this noble cause, to protect and promote human rights and the protection of civilians.

Find the original statement under the following LINK,