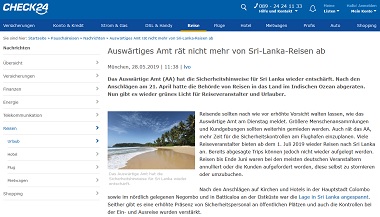 As the internet portal Check 24 reports, the Foreign Office (AA) has defused the security advice for Sri Lanka again. After the attacks on April 21, the authorities had advised against traveling to the country in the Indian Ocean. Now, there is again green light for tour operators and tourists.

The Federal Foreign Office has defused the safety instructions for Sri Lanka again.
Travelers should continue to exercise increased caution, as the Federal Foreign Office reports on Tuesday. Greater crowds and rallies should continue to be avoided. Also, the AA advises to schedule more time for security checks at the airport. Many tour operators offer from 1 July 2019 again trips to Sri Lanka. Already canceled trips can not be reissued. Travel up to the end of June had been canceled at most of the German organizers or customers were asked to cancel or rebook them.

After the attacks on churches and hotels in the capital Colombo as well as in the northern Negombo and in Batticaloa on the east coast, the situation in Sri Lanka was strained. Since then, there has been an increase in the presence of security personnel in public places, and checks on entry and exit have also been stepped up, the report adds..