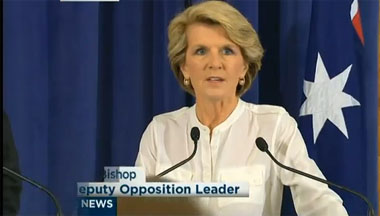 An Australian parliamentary delegation led by the Australian Deputy Opposition Leader Julie Bishop that visited Sri Lanka during the end of January has praised the work done in the North & East of the Island within such a short period since the end of war.

The parliamentary delegation was accompanied by Shadow Immigration Minister Scott Morrison and Border Protection Spokesman Michael Keenan. During this visit the Australian delegation has met with three separate groups who are involved in the reconciliation and reconstruction process in the former war torn Northern & Eastern provinces of Sri Lanka.

The first group had been the members of Parliament from the Tamil National Alliance (TNA). TNA is the majority representation in Parliament from the Northern Province and they sit among the Opposition MPs in Parliament. The second group consisted of INGOs, NGOs UNHCR, IOM and AusAid with whom the meetings were organized by the Australian High Commission and the third group had been representatives of the Sri Lankan Government including the President of Sri Lanka. The discussions had been on a range of issues including the issue of illegal immigrants.

Speaking to the press upon their return to Australia Julie Bishop said that she was struck by the amount of reconstruction work that is going on in the former theatre of conflict. She said that billions of rupees are being spent on major infrastructure development projects, such as the construction of new roads, water sanitation projects, and electricity transmission projects were self-evident to anybody travelling to these areas.

She also stressed the fact that the purpose of their visit was neither to take any sides between the Singhalese and the Tamils nor to interfere in the internal politics of the Island, but entirely to see the ground conditions to determine the accuracy of their foreign policy on Sri Lanka.

She elaborated on many areas of development taking place in Sri Lanka, like the successful resettlement process, referring to about 90% of the internally displaced persons (IDPs) being resettled in permanent or temporary but habitable houses. She also acclaimed the progress made in healthcare in these areas.

Bishop also commented on the creative use of a large military force for civilian work during peace times, such as constructing houses for the IDPs and as labour for the adornment of cities like Colombo, the Capital of Sri Lanka and said that she witnessed a dramatic change in the city. She said that she was not unrealistic or inequitable in her expectations regarding the reconciliation process after a bloody thirty-years war coming to an end only three years ago with the defeat of the LTTE by the Sri Lankan military forces.

She also stressed that Australia should attend the Commonwealth Heads of Government Meeting, (CHOGM) and should encourage other countries to attend. The CHOGM is scheduled to be held later in the year in Sri Lanka.

She reiterated that Sri Lanka is making inroads into the challenges facing the country after seeing the positive steps the Sri Lankan Government has taken to alleviate the wounds of war, and said that the Govt. should be encouraged to continue to do so.

Mr. Scott Morrison speaking on the same lines, divulged some very important and interesting development evaluations within Sri Lanka, like the increase of the country's GDP to US$1000/- per person (a 50% increase) since the end of the war three years ago and the tourist arrivals into the country has topped 1 million, i.e. almost double compared to the arrivals three years ago.

Speaking particularly on the subject of illegal immigrants to Australia from Sri Lanka, he was convinced that the people making the perilous journey, do so for economic and "lifestyle"-purposes rather than due to a threat of persecution or a risk to life if these people remain in the Island. The real danger to their lives is spending Rs.1 million for a three-thousand-mile journey to Australia as refugees. It was also said that the opposition policy would be to return all illegal refugees back to their home country.