The sound of Kandyan drums reverberated through the hall, lithe bodies moved with the music. Colour, movement and sound.

The performance of the Bishops college hewisi band and music from the De Lanerolle brothers was the finale of an event organised by the DAW German-Asian Business Circle on the 25th February 2013, in partnership with the Sri Lanka consulate in Frankfurt to bring together the business communities in Germany and Sri Lanka in a full day economic forum. The event included an investment forum, Sri Lanka specific workshop and business to business matchmaking for Sri Lanka companies and an evening reception.

Sri Lanka partner country status was sponsored by the Western Province tourist board and the Chairman Claude Thomas attended the event together with the Secretary. Hon Rishard Bathiudeen, Minister of Trade and Industry, Embassador Sarath Kongahage, Members of the Ceylon Chamber of Commerce, Heritage Homes of Aitkin Spence, The BOI and many other Sri Lankan organisations participated.

The purpose of the event was to raise the profile of Sri Lanka in Germany and to bring Sri Lankan businesses in Direct contact with German companies. Partnering with a large established organisation such as the DAW provided access to a large number of German companies who are members of DAW. 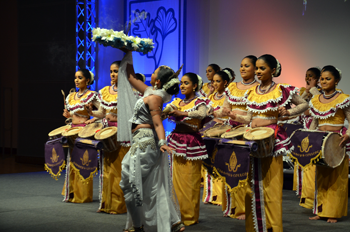 The Consul General of Sri Lanka in Frankfurt, Pradip Jayewardene delivered the keynote address and highlighted the difficulties Sri Lanka faced at the ending of the war and the contrast between wartime and peace experienced by the country today. Explaining the situation at the ending of war, he said that Sri Lanka would never let go of it’s hard won peace despite the efforts of outside forces. The Consul Generals speech was well received by the German audience as they too had experienced war and great difficulty in their past. He appealed to the audience to work with Sri Lankan companies and to visit Sri Lanka.

The full text of the Mr. Pradip Jaywardene's speech follows:

At todays conference we have discussed the growing and vibrant economy of our country, its tourist attractions, incentives for investment, rapid development of infrastructure, our positioning as a Naval, Aviation, commercial, Energy and Knowledge hub.

All of these are founded on our values, our democratic system of government, our culture and our religion. We are a country where the majority follow the teaching of lord Buddha. A faith we have protected for over 2000 years. Through the centuries we have absorbed many other cultures and religions and all of them are allowed to practice their customs and beliefs without interference. Even under the great western powers we were able to preserve our religion and our culture.

We adopted democracy which agrees well with our culture and our beliefs. We have preserved our democratic system of government for over 60 years. We liberalised our economy and allowed foreign ownership of businesses more than 30 years ago. There are foreign investors who have become global players from their base in Sri Lanka.

We could not reach the true potential of our country due to a threat which manifested itself in the last few decades. We can call it terrorism, we can call it a rebellion or freedom fighters but I think you will understand it best if I use the word Fascist.

The movement and the leader that rose up against our government in the north of the country, eliminated moderate politicians, eliminated anyone that criticized them and anyone who had a different view. They destroyed all other groups and their leaders, forced the population into becoming a support structure for their war machine. They built an army, a navy an air wing, special forces, an intelligence network and purchased ships for supplying war material. They launched around 200 individual attacks on civilian targets killing over 4000 civilians. Independent human rights organisations have estimated that around 7000 prisoners have died in Tamil tiger prison camps. They systematised the use of suicide bombers…. And child soldiers’ in the words of a former UN official.

Three years ago we ended this war by destroying this fascist army and its leaders. Today our people can walk freely in any part of the country without risk and without fear. The former war zones are now beautiful fields, the once empty towns are full of people, children are back at school. There is rapid development in roads, railways electricity and housing. We have complete normalcy.

But there are people who are not happy with this situation. They are the people who lived from the war, by collecting money, by supplying arms, used the conflict for politics in their own countries, by preaching human rights, by selling story’s in the media. They have now got together and created a new story about the ending of the war. They have come up with pictures, videos, eye witness accounts.

They have made documentaries and books and they go around the world spreading lies. They want the international community to bring pressure on our government and they want to replace our strong government with a weak one so that they can start again.

But they forget to blame the organisation which took people living in an area of 4000 square kilometres into a strip of land of just 10 square kilometres. This was the final battleground, three hundred thousand people trapped in 10 square kilometres and a few terrorist among them. It is like trying to remove the rotten trees in the middle of the forest without damaging good trees, it cannot be done.

Thanks to the patience, discipline and tremendous sacrifice of our soldiers, the civilian casualties were a minimised. 294,000 civilians were rescued.The peace we have won we will not give up, we will not falter and we will not give in to external pressure.

You can help our country preserve it’s peace and it’s freedom, by visiting us, by looking for investment opportunities and by creating new business, by talking to your governments about doing more in Sri Lanka. I hope the conferences we organised today, meeting with the delegates from Sri Lanka and watching our performing artists have given you a better understanding of what Sri Lanka can offer.

Do not be influenced by the false propaganda except to ask yourself one question; What is it in this country that they want so much? This question you must answer for yourself."