The Embassy of Sri Lanka in Berlin celebrated ‘Vesak’ on Friday 4th May 2018 at the City Hall in Steglitz with the participation of Sri Lankan and German nationals. The program was conducted in German language with the intention of reaching out to the German Buddhist Community. The Vesak commemorative sermon was delivered by Ven. Dr. Wijayarajapura Seelawansa Thero, the Chief Patron of the Austrian Buddhist (Theravada) Association in Salzburg. The dhamma topics discussed at the session provided a deep insight into the teachings of the Lord Buddha. and the participants were encouraged to follow and reflect more deeply on the Buddhist way of life. 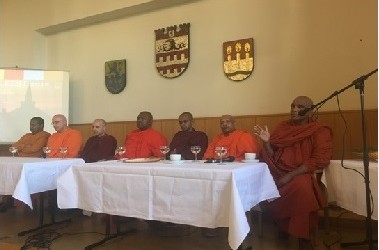 The celebrations commenced with a ‘Gilanpasa Buddha Pooja’ and chanting of Seth Pirith by Ven. Mahagama Suvineetha Thero of the Buddhist Temple in Frohnau and other resident Venerable Theros of the Buddhist Temples in Berlin. A meditation session for the participants was conducted by Ven. Rambukwelle Devananda Thero of Berlin Sri Sambodhi Temple. An introductory sermon to the program was conducted by Ven. Santuttho Thero of Germany.

Speaking at the occasion, Ambassador Eng. Karunasena Hettiarachchi highlighted the importance of the Vesak day and the teachings of the Buddha, which convey a timeless message for every individual to live happily and peacefully. At the end of the program the participants were invited to enjoy a Sri Lankan vegetarian meal prepared by the Embassy staff.

In order to commemorate this significant event, the Embassy premises were also decorated with Buddhist flags and colorful Vesak lanterns for a period of one week, creating the Vesak ambiance in Berlin. During his visit to Berlin, Ven. Dr. Wijayarajapura Seelawansa Thero delivered a sermon at the Embassy premises for the benefit of the staff members and their families. 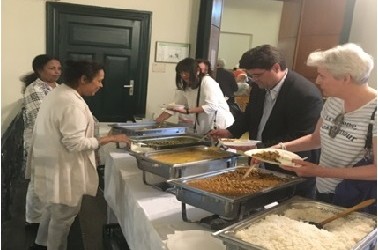 The Ambassador and the staff of the Embassy also collaborated at the special Vesak Day program on 06th May 2018 at the Buddhist Temple in Berlin-Frohnau with the participation of a large gathering of Sri Lankans and Germans. The event included a Vesak Dansala and Bakthi Geetha. 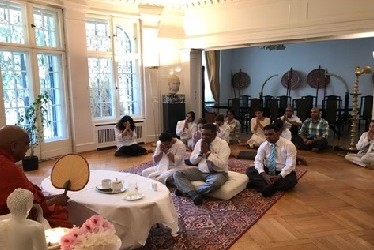 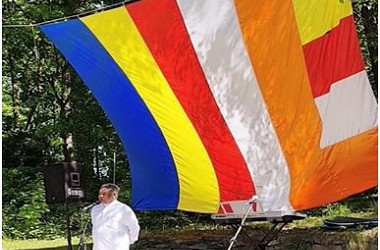 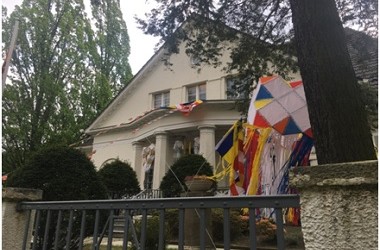 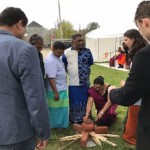 The Embassy of Sri Lanka in Berlin together with the Sri Lanka Associations in Berlin and the Berlin Lions Cricket club organized the Sinhala and Tamil New Year festival on 14th April 2018 at the grounds of Reinickendorf, Berlin.
Highlighting the festive spirit, the ground was decorated with National flags and other traditional items. 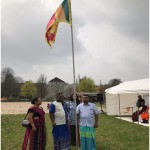 Buddhist and Hindu religious observances were conducted to bless the participants and the people of Sri Lanka. Marking the New Year tradition the ‘Kiri ithiriaweema’ was performed anticipating prosperity for the nation. 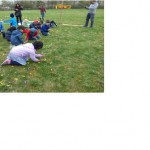 Speaking at the occasion, Ambassador Hettiarachchi wished everyone present a happy and a prosperous New Year and highlighted the significance of celebrating New Year which renews family bonds and friendships. Ambassador also thanked members of the community and well-wishers for being present throughout the festival and for their active assistance and contribution in promoting Sri Lanka’s unique traditions and customs in Germany.

All participants were treated to a sumptuous traditional New Year ‘Kevili’ table specially prepared for the occasion. 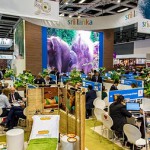 The Embassy of Sri Lanka in Berlin is in the process of finalizing arrangements for the participation of ITB 2018.

In view of that, the Embassy would appreciate to receive quotations for the following: 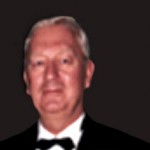 Sri Lanka will be represented by the Sri Lanka Tourism Promotion Bureau at the ITB 2018 which will be held from 06th to 11th March 2018 at Messe Berlin GmbH (Hall 5.2a), Messedamm 22, 14055 Berlin. In view of this Sri Lanka Embassy in Berlin is looking for qualified and motivated young applicants with Sri Lankan background to support in the pavilion of Sri Lanka. The identified candidates are expected to assist the Embassy and Sri Lanka Tourism Promotion Bureau in receiving the guests to the booth, providing information on tourist attractions, preparation of tea for the visitors, assisting VIPs, directing inquiries to the officers of SLTPB and carry out any other duties assigned related to the event. 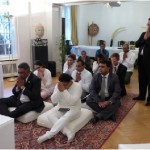 The Embassy of Sri Lanka in Berlin organized an alms giving to mark the seventh day since the passing away of late Dr. Karunatilaka Amunugama (former Secretary of Foreign Affairs and Ambassador of Sri Lanka to Germany) on Wednesday 20th December 2017, with the participation of representatives from the Sri Lanka organizations in Berlin and the East Asian Association Hamburg at the Embassy premises.