The Embassy of Sri Lanka in Berlin is also accredited in Switzerland, Croatia, Macedonia and Montenegro. In this context, the Embassy calls for applications by interested persons to fill the vacant positions of Honorary Consuls in Macedonia and Montenegro. Invited are professionals, businessmen and self-employed entrepreneurs in Macedonia and Montenegro, who are interested in strengthening the relations between Sri Lanka and their home countries and would be able to allocate fixed calling hours per week for this purpose. More information can be called for via e-mail to . Interested applicants could forward their CV with a request letter addressed to H.E. the Ambassador, Embassy of Sri Lanka, Niklasstr. 19, 14163 Berlin, Germany. 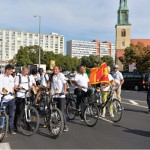 The Embassy of Sri Lanka in Berlin has successfully concluded a bicycle rally on 1st September 2018 from Alexanderplatz in Berlin city centre to the Chancery premises in Zehlendorf. The rally, which was organized in cooperation with the Federal Foreign Office, is the second event organized by the Mission in celebration of the 65th Anniversary of Diplomatic relations between Sri Lanka and Germany. 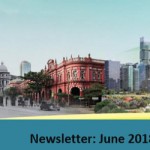 The newsletters of the Embassy of Sri Lanka in Berlin for June and July 2018 have been released and can be downloaded under the following links:

Celebrating the 65th Anniversary of Diplomatic Relations between Sri Lanka and Germany, the Embassy of Sri Lanka in Berlin is organizing a

The Bike Rallye will be starting at 9.30 hrs. at the Rote Rathaus near Berlin-Alexanderplatz. It will pass by the Foreign Office and the Kaiser-Wilhelm-Gedächtniskirche and will end at around 11.00 hrs. at the Embassy, Niklasstr. 19, 14163 Berlin. At arrival at the Embassy, refreshments and Kottu Rothi will be offered. 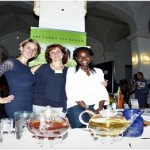 The Long Night of the Consulates is an event organized by the Bavarian State Chamber and the Consular Corps every two years. The event is opened to the public to give them an opportunity to get to know the city's cultural diversity. At this event, the public can also gain an insight into the work of the consulates and learn about the various countries and their cultures, and sights.

The Embassy of Sri Lanka in Berlin offered 28 Buddha statues on 26th July 2018 to the Theravada Buddhist temple in Frohnau, Berlin. The event also marks the first program to be conducted by the Embassy to felicitate the 65th Anniversary of Sri Lankan-German diplomatic relations. 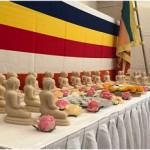 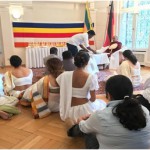 The meritorious act was initiated by Ambassador Eng. Karunasena Hettiarachchi and was assisted by the members of the ‘Suwatha Kawaya of Independence Sqaure, Colombo 7’, coordinated by Mr. Mahinda Bandara and Mr. Sudath Tennakoon. The Ministry of Foreign Affairs together with the Ministry of Buddha Sasana and Sri Lanka Customs assisted the Mission in bringing the Buddha Statues from Sri Lanka. 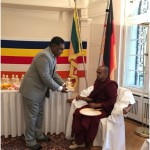 The handing-over ceremony was held at the Embassy premises with the participation of representatives of the Sri Lanka Associations in Berlin and the Embassy staff. The resident monk of Frohnau Buddhist temple, Ven. Mahagama Suvineetha Thero, conducted the religious observance and blessed all those who initiated and assisted this task.

On Sunday, 1st July 2018, a special ceremony was held to commemorate ‘Poson’ at the Frohnau Buddhist temple together with a special ‘Atawisi Buddha Pooja’ to bless H.E. the President, the people of Sri Lanka and the participants from Germany.

The Sri Lankans living in Berlin and the German Buddhist community expressed deep gratitude for the offering, which will also contribute to Buddhism in Germany. This gesture will promote the cordial relations between Sri Lanka and Germany and will also facilitate for the betterment of the younger generation of Sri Lankan origin. 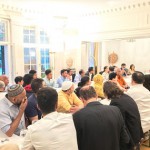 To share the blessings of Ramadan, the Embassy of Sri Lanka in Berlin celebrated the traditional Ifthar on Monday, 11th June 2018, at the Embassy premises. The event was well attended by a large gathering of the Sri Lankan and German Muslim community living in Berlin and representatives from the Sri Lanka Associations in Berlin. 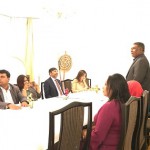 The Ambassadors of Pakistan and Maldives also graced the event and appreciated Sri Lanka’s efforts in promoting ethnic and religious harmony between its communities. 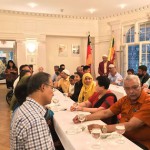 Welcoming the guests, Ambassador Karunasena Hettiarachchi highlighted the significance of Ramadan, the month of introspection, tolerance and restraint, and emphasized the importance of promoting inter-faith harmony for the betterment of the country. Ambassador Hettiarachchi further stated that the celebration of such events highlights Sri Lanka’s multi-ethnic and multicultural nature. The Embassy Ifthar celebration provided an opportunity for the Sri Lankan community to commit to support their brothers and sisters in Sri Lanka in their efforts to achieve unity and reconciliation.

Moulavi Fathiah led the Ifthar prayers and blessed the country, the people of Sri Lanka and the participants. He recalled the significance of Ramadan and how it contributes to self-development and global peace.

The breaking of the fast and prayers were followed by a dinner with Sri Lankan cuisine.