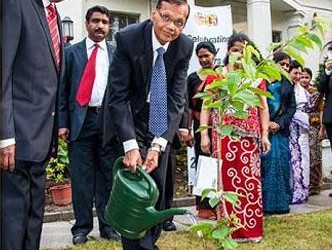 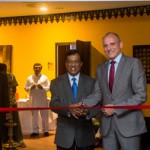 The Open Day of the centrovital aroused great attention on occasion of the opening of the first Siddhalepa Ayurveda Center in Berlin. Approximately 200 visitors came to the 4-star hotel of the centrovital to experience the world of Sri Lankan Ayurveda. 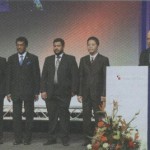 The President of the Deutsch-Asiatischer Wirtschaftskreis (DAW), Honorary Consul General Bodo Krüger, in his address on occasion of the New Year Reception of his organization referred to the challenges for the Asian states among others in the year 2013, elections in some countries, doubling of the population until 2030, necessity of investment in the protection of the environment (for instance the air pollution in Beijing) and the traffic infrastructure (construction of new underground lines in cities with more than five million inhabitants. 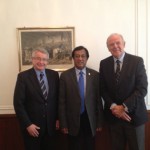 The Hanover Lions District III NH, which consists of 84 clubs, is funding the PICU-development project in Galle in the South of Sri Lanka, where severe damages had been experienced during the Tsunami disaster on 26th December 2004. H.E. the Ambassador Mr. Sarrath Kongahage had a cordial meeting with the Project Directors of the PICU Foundation, Prof. Wolt Dieter Gogll and Mr. Hartmuth Schulz of the Lions Organization of Hanover. Prof. Wolt Dieter Gogll together with the late Mr. Chandra de Silva of the Lions Club of Hikkaduwa and the doctors of Karapitiya Teaching Hospital in Galle initiated the PICU-development project. 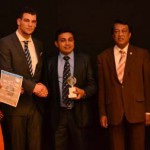 Defeating many countries in the region Asia, Australia and Oceania, Sri Lanka wins the third best exhibitor award at the International Tourism Fair in Germany. The selected criteria for the award are Design, activities, services and information materials. The impression of the pavilion of Sri Lanka was highlighted with the phrase, ''smiling people and traditional manners'' at the award ceremony. The Award was received by Mr. Rumy Jauffer, Managing Director of Sri Lanka Tourism Promotion Bureau. H. E. the Ambassador also participated at the award ceremony. 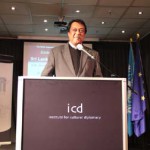 From 6th to 10th March, the Berlin International Economics Congress 2013 organized by the renowned Institute of Cultural Diplomacy (ICD), an international organization with headquarters in Berlin with the focus on the promotion of international understanding by cultural exchange, took place under the motto of "Intercultural Relations, Youth Development Advancement, Environmental Responsibility & Ecotourism: Opportunities for Successful Nation Branding in the 21st Century". Keynote Speakers from all continents were discussing a better future for their countries and the world. 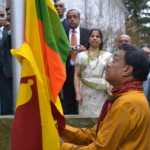 Parallel to the 65th National Independence Day Celebration in Sri Lanka, Independence Day was ceremoniously celebrated on the 4th of February at the official residence of the Ambassador of Sri Lanka in Berlin, Germany. Sri Lankan Ambassador Sarrath Kongagage chaired the celebration. Sri Lankans from all communities, representatives of Sri Lankan organizations based in Germany and the Embassy staff participated at the occasion.