The tenure of H.E. Ambassador Sarrath Kongahage, the Ambassador of Sri Lanka to the Federal Republic of Germany and concurrently accredited to Switzerland, ended in late July. He left Germany for his new assignment as High Commissioner of Sri Lanka in South Africa.

The German Federal Foreign Ministry hosted a luncheon at the fashionable “Bocca di Bacco”-restaurant in the centre of Berlin to bid farewell for Ambassador Sarath Kongahage on the conclusion of his tour of duty as Sri Lankan Ambassador for Germany.

Present were among others Mr. Peter Pruegel, Regional Director of the Foreign Office for Asia and the Pacific, Mr. Fabian Richter, Desk Officer for Sri Lanka at the Foreign Office, and Mr. Jens Ploetner, former German Ambassador to Sri Lanka and current Head of Office of the Federal Foreign Minister.

The Grassi Ethnological Museum in Leipzig has inaugurated a photographic Exhibition named “Sri Lankas Lächeln” – Sri Lanka’s smile – on 23rd May 2014 and will host this exhibition up to  23rd August 2014. The Exhibition consists of photographs taken by the renowned German Photographer Knut Stritzke and shows a series of portraits and landscape impressions of Sri Lanka. 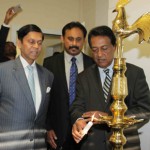 After his appointment as Sri Lanka Honorary Consul for the Zurich Canton in March 2014 under the guidance of the Sri Lanka Embassy in Berlin, Vidarshana Munasinghe has arranged a series of events officiating his functions.

The Embassy of Sri Lanka in Germany in collaboration with the Swiss Asian Chamber of Commerce, Switzerland successfully concluded the 3rd Swiss Sri Lanka Business and Investment Forum 2014 on the 12th June 2014 at the Zurich Yacht Club in Zurich, Switzerland.  After the end of the 30 years of long conflict in Sri Lanka, the Swiss based industrialists and financial houses present at the forum have shown an increasing interest in Sri Lanka's investment and business opportunities.  Because of the conducive environment after the end of the conflict in the country, Sri Lanka has become the most popular destination focus for their businesses among all other emerging economies of the world. 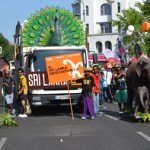 On invitation by the Swiss President of the Confederation, Didier Burkhalter, the diplomatic corps accredited in Switzerland undertook a visit to the republic and canton of Neuchatel in Switzerland. H.E. Sarath Kongahage, Ambassador of Sri Lanka to Germany, was part of the delegation including Mr. Burkhalter and his spouse Mrs. Friedrun Sabine Burkhalter.