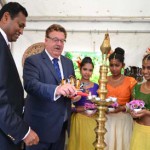 The Embassy of Sri Lanka in Berlin showcased the distinctive diversity, compactness and the rich cultural heritage of Sri Lanka and promoted Sri Lanka as a destination for tourism, trade and investment at the event ''Open Day'' under the slogan of ''Future Charter – One World, One Responsibility'' organised by the Federal Ministry of Economic Cooperation and Development (BMZ) of Germany on 31st August 2014. 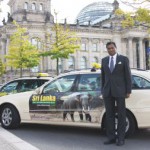 The Ambassador of Sri Lanka, H.E. Karunatilaka Amunugama, came to the German Parliament in Berlin to see 12 taxies decorated with different images, depicting eight themes of Sri Lanka Tourism, on 18 August 2014. As part of the Sri Lanka’s Tourism Promotion Bureau promotional campaign an overall of 75 branded taxi will operate in Germany’s capital. 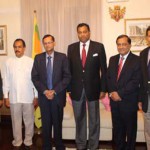 At the Sri Lankan Embassy in Rome, External Affairs Minister Professor G.L. Peiris met with several of the country's Ambassadors in the region for a comprehensive review of their work. 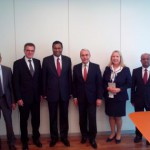 Ambassador Karunatilaka Amunugama had a fruitful meeting with Dr. Michael Bornmann, Member of the Management Board, and senior officials of the DEG Bank at the Head Quarters of the DEG Bank in Cologne on 15.08.2014. The DEG Bank has been making investment and co – financing identified industrial and financial institutions in Sri Lanka for past 30 years. 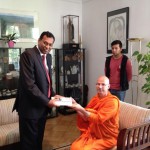 Book in German on the rules for Buddhist monks "BHIKKHU-VIBHANGA - Die Einteilung der Vorschriften für Buddhistische Mönche", a translation from Pali by the German Buddist monk Santuttho, was handed over to H.E. the Ambassador of Sri Lanka, Karunatilaka Amunugama, by him at the Embassy on Thursday, 7th August 2014.

Ambassador designate of Sri Lanka, H.E. Karunatilaka Amunugama, arrived in Germany on 25th July 2014. Ambassador Amunugama, a former Secretary to the to the Ministry of External Affairs, is a seasoned diplomat who served as Ambassador of Sri Lanka in the Kingdom of Thailand, Japan and the People’s Republic of China.