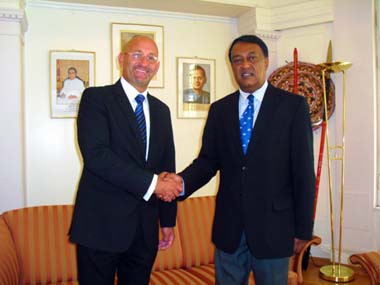 The Secretary General of the Intergovernmental Organization EDU, H.E. Irving Levance, was received today by H.E. Upali Sarrath Kongahage, the President of the Diplomatic Council, who is currently serving as an Ambassador Extraordinary and Plenipotentiary of the Democratic Socialist Republic of Sri Lanka to Germany.

The purpose of the meeting was to outline current EDU projects and to be briefed on the educational priorities and policies of the Sri Lankan Government.

H.E. Upali Sarrath Kongahage lived up to his reputation as a soft spoken diplomat, graduate of the University of Kelaniya, Attorney at Law and skilled orator. The Secretary General was impressed by the Sri Lankan diplomat's clear explanation of the nation's history from its foundation to present day, delivered without notes, which demonstrated an almost encyclopaedic knowledge of the nation he represents.

• Sri Lanka being one of the oldest established Asian democracies dating from the 1930's, being a pioneer in the region of introducing female voting rights, having the first woman Prime Minister and the First woman President;

• The impressive attainment of a 90% literacy rate, free state funded Education following the British model, up to and including tertiary level education; the establishment of private universities specializing in Medical, Legal and Information Technology areas;

• The importance placed upon I.T. literacy; the current strike amongst university lecturers demanding that education be apportioned 6% of national GDP in the face of difficulties to raise the input above 3% of GDP as the nation takes on the costs of repair and reconciliation following three decades of civil conflict; that the nation currently has about 80,000 students enrolled in tertiary level education out of a population of about 21 million;

• The encouragement of multicultural private education establishments in a tri-lingual country with Singhalese, Tamil and English as the official languages, the provision of universal free medical care and the policy of subsidizing agricultural materials such as fertilizer while at the same time guaranteeing prices paid to farmers to encourage a stable food economy.

H.E. Upali Sarrath Kongahage spoke at length and with heartfelt conviction of the need for all the peoples of Sri Lanka to come together in consolidation and reconciliation of the peace established after an extended internal conflict. Education, he affirms, is a prime factor in this undertaking. These comments sat well with H.E. Irving Levance, since he heads an Intergovernmental Organization dedicated to promoting understanding and education.

Sri Lanka's enviable record in education provision is an impressive example of how a well-planned and well-implemented education policy can benefit a country's development.

Current areas for improvement were identified in the need for training schools for teachers, Information Technology and specialized languages.

H.E. Irving Levance of EDU gratefully received a box of Connoisseur Pure Ceylon Tea as a parting gift as the two diplomats agreed to strive to identify areas of future cooperation.