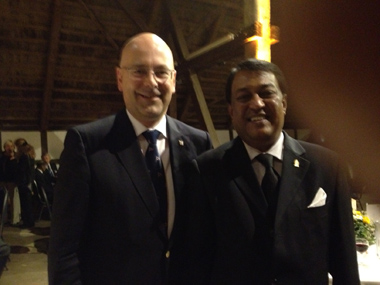 Ambassador Sarrath Kongahage met with the newly elected Minister President of Schleswig-Holstein Mr.Torsten Albig at the traditional sailing event "Kieler Woche", the largest sailing event in the world, which took place in Kiel, Germany from 20th to 22nd June 2012.

The state government of Schleswig-Holstein organised the event and more than 15 Head of Missions including Ambassadors for Japan, Nepal and Mongolia participated at the event on invitation by the newly elected Minister President of Schleswig-Holstein. During the programme, Ambassador Kongahage was able to meet Minister President Albig and other high-ranking German politicians, businessmen and industrialists and brief them on the situation and the opportunities for investment in Sri Lanka.