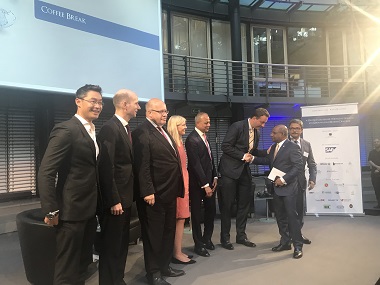 The 4th German – Asian Business Dialogue was held on 5 June 2019 at the Alliance Forum in Berlin. Chief of Staff of the Prime Minister and Minister of Ports and Shipping Sagala Ratnayaka, attended the Dialogue as a special guest and was a panellist at the Minister’s Dialogue on ‘Building Bridges between Europe and Asia: Chances and Challenges of Free Trade in a Changing World’.

During the Minister’s Dialogue, the Minister highlighted the significance of Sri Lanka in the world map due to its strategic location, and potential available for Sri Lanka to further develop as a logistics hub.

At the closure of the session, responding to the panellists, the German Minister for Economic Affairs and Energy requested to forward proposals of the respective countries on trade facilitation, for the consideration of Germany.

Ambassador Eng. Karunasena Hettiarachchi and the Embassy Officials accompanied the Minister at the event.

On the following day, the Hon. Minister attended a Breakfast Meeting held in the Parliament premises with the diplomatic core, representatives from German Chambers and business leaders. Current situation in Sri Lanka, potential for FDIs from Germany and Sri Lanka’s participation in the Belt and Road Initiative were among the many topics discussed during the Meeting.