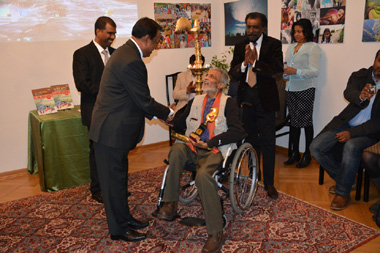 The State Literary Awards in Sri Lanka for the year 2012 were recently held at the Bandaranaike Memorial International Conference Hall (BMICH) in Colombo, where many writers won awards for their contributions. The Best Children's Literature Award in English was won by Mr. Neville Perera for his book 'Kitty and the Bell Necklace'. 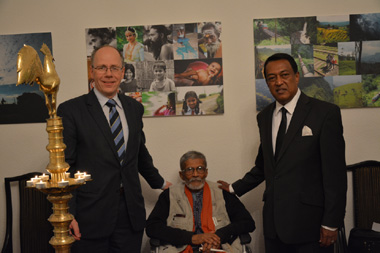 Since Mr. Neville Perera was unable to go to Sri Lanka to receive the State Literary Awards in Sri Lanka due to sickness, the Embassy of Sri Lanka in Germany and the Sri Lankan community jointly organized a event to present the award and felicitate Mr. Neville Perera's marvelous contribution to the literature and his achievement.

H. E. the Ambassador in his speech recollected his memories with Mr. Neville Perera and reminded him of the days when they were actively engaging in student activities. In his review of the award winning book 'Kitty and the Bell Necklace', the ambassador said that the book has a catchy title, and the theme, plot, and the style of the story is innovative and emotional, giving a new path of thinking deviating from the conventional way of story telling. The language used by Mr. Neville Perera for the narration is very eloquent and understandable. "The story teaches us how to make peace and harmony and lead an honest life. The illustration done by Mr. Shanth Herath adds a touch of reality to the characters of the story,´" the ambassador added. 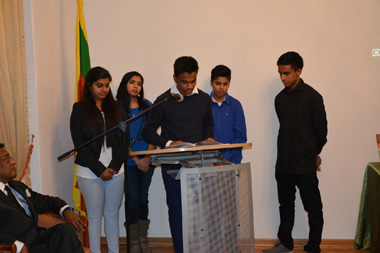 H.E. the Ambassador requested the Sri Lankan community to give importance to learn their mother languages Sinhala and Tamil. He mentioned that he observed the Tamils living in Germany giving high significance to learn the Tamil language, which is admirable. The Embassy was also supporting their efforts by getting books from the Ministry of Education of Sri Lanka and distribute them, he added. 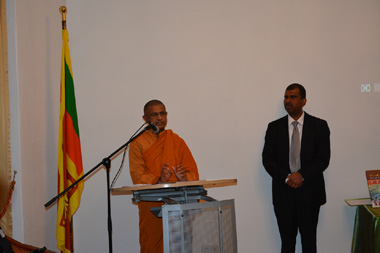 Rev. Ratmalane Punyarathna Thero, Lecturer of Johannes Gutenberg University in Mainz , Germany reviewed the book and highlighted the effect of Children's literature in the relationship between parents and children.

Mr. Neville Perera thanked the Embassy and the Sri Lankan community for arranging the event. He appreciated the initiative of the ambassador in organizing the exhibition of historical 19th century photographs under the title "Landscapes of Sri Lanka" at the Museum of Asian Art in Berlin, which is being visited by many Germans, and the publication of the scholastic catalogue on the exhibition containing rare photographs of Sri Lanka with articles. 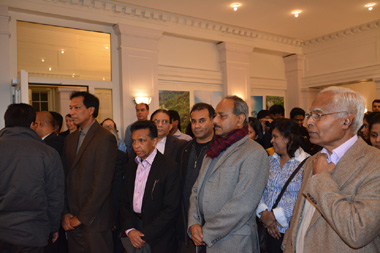 Dr. Hans-Gunther Oberlack, Mayor of Glienicke-Nordbahn, Mr. Perera's place of residence , members of the Sri Lankan community and the embassy staff participated in the event. Dr. Oberlack announced his plan to organize an event to pay tribute to Mr. Perera at the town hall in Glienicke-Nordbahn in the near future.