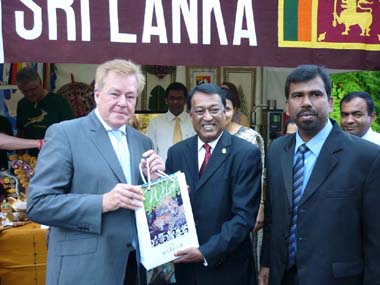 On 19th August 2012, the Federal Ministry of Economic Cooperation and Development (BMZ) of Germany opened its doors to the German public for an ''Open Day'' under the slogan of '' Developers of the Future'' in order to provide an opportunity to the German public to obtain comprehensive information in both the bilateral relations of Germany with the partner countries and the cultural specifics, typical characteristics and economical & tourism aspects of the partner countries.

Sri Lanka as an important development cooperation partner of Germany made a presentation in the form of a stall depicting tourism and exports and also participated in the stage performance reflecting the rich culture of Sri Lanka.

The Embassy showcased the distinctive diversity, compactness and the rich cultural heritage of Sri Lanka and promoted Sri Lanka as a destination for tourism trade and investment. The stall for Sri Lanka was turned into Mini Sri Lanka and showcased artefacts, handicrafts and samples of Sri Lankan cinnamon and tea. 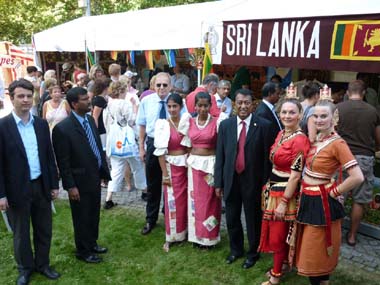 The participation of Sri Lanka in the stage performance provided the audience the chance to get to know the classical dances of Sri Lanka. The outstanding traditional Kandyian dance ''Gajaga Wannama'' (dance of elephants) performed by Ms. Almut Jayaweera received a special attention of the audience and they were enchanted by the unique rhythm and traditional costume. Ms. Jeyaweera, a German national, who stayed in Sri Lanka for five years to learn the Kandyian dance, is presently teaching and performing the Kandyian dance in Germany.

The folk dance ''Diya Keliya'' performed by Anjali Dissanayake and Malki Dilshani depicting the scene of rural women having a joyful bath in a river as well as singer Prabath Rupasinghe perfoming well-known Sri Lankan songs received very much applause of the audience. The Embassy also portrayed one of the best photographs of Mr. Athula Dissanayake, a renowned artist from Sri Lanka at the future exhibition organized by the Ministry, which received much admiration. 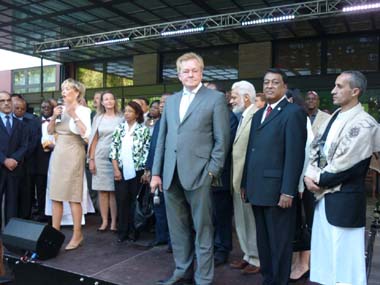 Presenting Sri Lankan tea was a magnet of pulling the huge crowed towards the stall of Sri Lanka. At this hot day, many visitors were happy to drink a refreshing cup of tea served at the stall.

The State Secretary of the Federal Ministry of Economic Co-operation and Development (BMZ) of Germany, Mr. Hans-Jürgen Beerfeltz, also visited the Sri Lankan stall, recalled his visit to Sri Lanka, and mentioned that he is still cherishing the marvellous beauty of Sigiriya in his mind.

H.E. Ambassador Upali Sarrath Kongahage thanked the State Secretary for the opportunity given by the Ministry to promote Sri Lankan culture and products. During the day, H.E. the Ambassador also met many personalities from the German political scene and Ambassadors of other countries