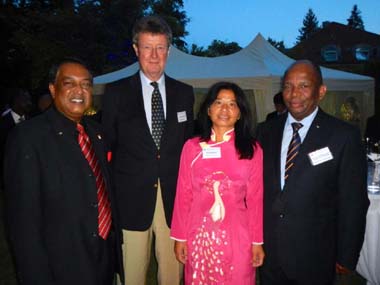 The reception oriented towards the dual purposes of promoting Sri Lanka as a destination for tourism, trade and investment and bringing together diplomats and decision makers from Germany. The programme consisted of two parts.

In the afternoon, the participants, which mostly belonged 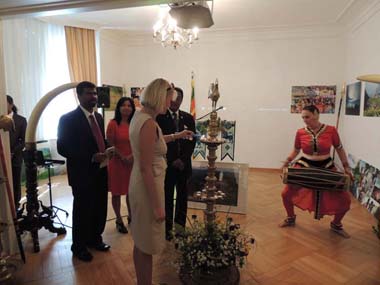 to the business community, were invited to the Chancery and were briefed with regards to the prevailing stability in Sri Lanka after the end of conflict, the country's economic development and the areas of potentials for investment and trade. The presentation by Ms. Rajini Dikwella was very informative and the guests were able to obtain a clear idea regarding tourism, trade and investment in Sri Lanka. In his welcoming speech, the Ambassador mentioned that Sri Lanka is marching forward towards a prosperous future and expects the business community and investors from Germany to explore the possibilities of investing in Sri Lanka. The promotion programme was enlivened by two traditional dances, the Bharatha Natyam and the Kandyan dance. The Embassy also exhibited photographs of Mr. Athula Dissanayake, a renowned artist from the Sri Lanka Rupavahini Corporation, which received the admiration and 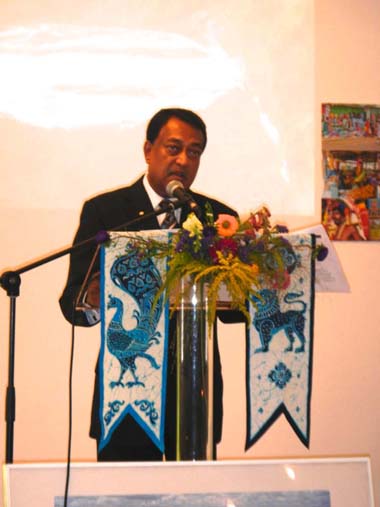 increased the curiosity of the guests to know more about Sri Lanka.

One of the highlights of the evening was that the Ambassador was accepted as an honored member of the renowned Elephant's Club, a charitable organizations connection networking with social activities with German dignitaries like the former Minister President of the State of Hessen and now Chairman of Bilfinger Berger, Mr. Roland Koch, and Dell-CEU Michael Koch as its members. 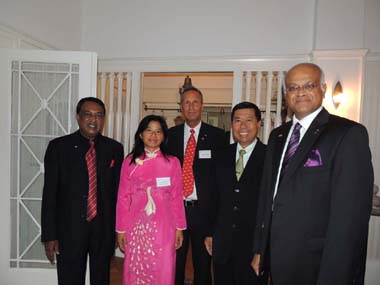 (Getaberaya and Thammettama) performed by Ms. Almut Jayaweera and her group consisting only of German nationals received much appreciation and applause of the guests. The Bharatha Natyam performed by Miss. Pruntha Puveneswaran, a Sri Lankan student in Berlin was equally acclaimed. The sumptuous Sri Lankan meal and Mr. Prabath Rupasinghe's cooling music made the Ambassador's Residence resemble Sri Lanka.