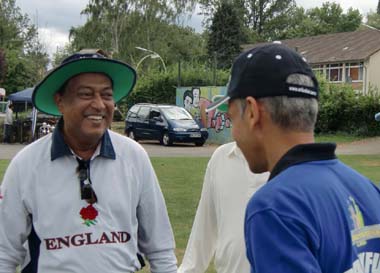 The Veterans Cricket Club in Bonn, Germany, which is one of the oldest Sports Clubs among the Sri Lankan community in Germany, organized a Soft Ball and Hard Ball Cricket Tournament between several Sri Lankan Clubs and community groups across the landscape of the Federal Republic of Germany. The matches were played on 25th August 2012 at the American base ground in Bonn The Chief Guest of the event was H.E. the Ambassador of Sri Lanka to Germany, Mr. Sarrath Kongahage, while the Consul General for Frankfurt, Mr. Pradeep Jayawardene, was the guest of honour. 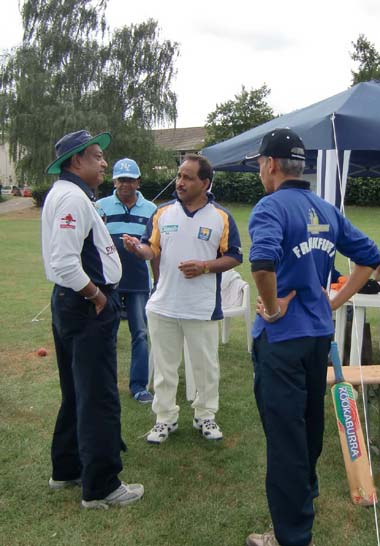 It was an unforgettable day for the Sri Lankan community in Bonn. The teams participating comprised all ethnic groups of Sri Lanka projecting a strong commitment to the multi-ethnic nature of the Sri Lankan community in Germany, which brought harmony between Sinhalese, Tamils, Muslims and others as one peaceful strong community. The other signifying feature of the tournament was the winner of the soft ball tournament, the Dortmund Cricket Club, a team comprising all Tamil players and finally winning the cup, bringing the togetherness of everyone to the focus. While the second place went to Bonn Cricket Club, the third place was secured by the Bochum Cricket Club.

One of the highlights of the day was the exhibition match played between the team from Bonn captained by Ambassador Kongahage and the team from Frankfurt captained by Consul General Pradeep Jayawardene. All those present at the event admired the participation of the Ambassador and the Consul General. The entire day was filled with live music by Mr. Pradeep Dissanayake and Mr. Raymond Cooray from Bonn. Mr. Raymond Cooray, the President of the Veterans Cricket Club in Bonn, was largely responsible for organizing this successful community event. The veterans also thanked all those, who helped to make this event a success, including the main sponsors of the event, Kumara Reisen, Firma Dela und Schulz and Mr. Ravi Navaratne for this unstinted support towards the success of this gala event.