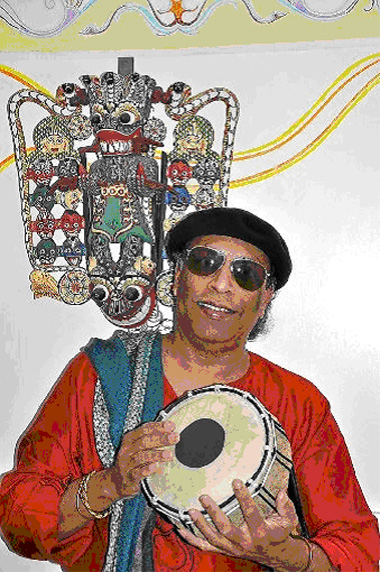 Leather trousers from Sri Lanka: Yes, that's possible. A Bavarian producer has moved his production to the island in the Indian Ocean. The Bavarian Finance State Secretary Albert Füracker informed about this result of globalization in Munich. The occasion was one of Germany-wide several receptions on occasion of the diplomatic relations between Sri Lanka and Germany existing for 60 years. As representative of his home country, the artist Jayantha Gomes living in Calw was present.

Hans Hammer, Honorary Consul for the district of Bavaria, had invited. Gomes' exhibition "Dreams of Harmony" was in the centre of the cultural programme.

The cycle of images comprising 15 paintings refers to the end of the civil war, which had been raging in Sri Lanka between Tamils and Singhalese from 1983 and 2009. In his images, Gomes wants to express his happiness about the peaceful development on the island since the end of the war. Since then, even economically there is a clear trend upwards on the island.

It was an expressed wish by Consul Hammer, that the Calw artist should present his images. During the reception, Gomes spoke on an image to introduce the visitors to his thoughts.

But not enough with that, as Gomes is not only painter and philosopher, but also musician. His friends know that he has developed a liking for the drum for some years already. Thus, he entertained the guests, among them Sri Lanka's ambassador Sarrath Kongahage, with his band Jayantha & the Clan and experimental music. Traditional Sri Lanka rhythms by Gerdi Lörcher (Percussion) and Gomes (Drums) were connected with the jazz-sound of Saxophone player Maurizio Brighina. The cultural programme was enhanced by Caroline Gebert-Khan, dancer and head of the Indian dancing school Lotus from Stuttgart.

The official reception took more than three hours. Still, he and his companions found their audience in a good mood, Gomes said in an interview with our newspaper after their return to Calw.