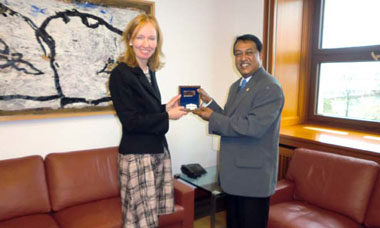 H.E. Sarrath Kongahage met with Dr. Ms. Emily Haber, the State Secretary at the Ministry of Foreign Affairs of the Federal Republic of Germany at the Federal German Foreign Office on 17 February 2012.
During the meeting, the Ambassador extensively briefed the State Secretary of the current developments in Sri Lanka in line with the reconciliation, reconstruction and rehabilitation process in the post conflict period of the country. H E the Ambassador also recalled the close cooperation existing between Germany and Sri Lanka and emphasised the necessity of expansion of such relations into wider cooperation.


The State Secretary thanked the Ambassador for his briefing and stated that she will be glad to work with him to enhance relationship between Sri Lanka and Germany.
The meeting was attended by the Head of the South Asia Section of the German Foreign Office, the Chief of Staff of the State Secretariat and the First Secretary of the Embassy of Sri Lanka in Berlin.
Embassy of Sri Lanka
Berlin
27 th February 2011