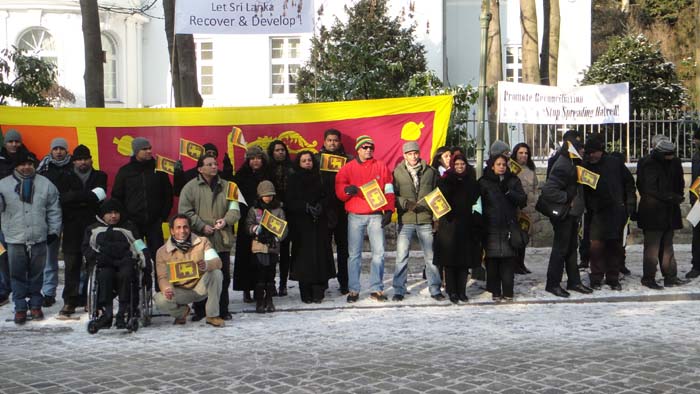 Parallel to the 64 th Independence Day Celebration in Sri Lanka, Independence Day was ceremoniously celebrated on the 4 th of February at the Sri Lankan Embassy in Berlin, Germany. The Deputy District Major of Zehlendorf, Michael Karnetzki participated at this occasion as a chief guest that was chaired by Sri Lankan Ambassador, Attorney-at-Law, H .E. Sarath Kongahage. A large crowd of Sri Lankans living in Germany, Germans and the Embassy Staff too joined this occasion. A demonstration was to be held by the L.T.T.E. supporters in front of the Embassy with the aim of sabotaging the Independence Day Celebration, which could be stopped successfully though coordination of the Embassy with Sri Lankan Associations finally.
In spite of the extremely cold weather, more than hundreds of Sri Lankans came together creating a protecting human wall against the L.T.T.E. demonstration by singing patriotic hymns for more than five hours after Hoisting the Sri Lankan National Flag, in order to pay their respect to their Motherland, Sri Lanka and her Independence. While the Sri Lankan Ambassador raised the National Flag a large crowd of Sri Lankan children joined the celebration by singing the National Anthem.
About 8 L.T.T.E. supporters were to be seen with banners far away from the Embassy and they disappeared quickl y due to the large crowd of Sri Lankans and to their delight. Sri Lankan Embassy was provided with security by the German Police and the coordinator of the L.T.T.E. in Berlin, Gopalapillei Jeyasankar, struggled with the German Police to get the ground in front of the Embassy for their protest, but the police officers drove them away without giving them any chance.
Defeated escape of this terrorist group, who hindered some previous Independence Day Celebrations or any other function held at the Sri Lankan Embassy by their presence in front of the embassy, can be considered as a special occurrence.
Independence Day Ceremony was held from 4 p. m to 8 p. m. After getting the guests on Pancha Seelaya by venerable Thero, it was started with blessings of Hindu, Catholic, Christian and Muslim Priests. National Day Messages by H. E. President Mahinda Rajapaksa, honourable Prime Minister D. M. Jayarathne and by Hon. Prof. G. L. Peiris M. P. were presented in Sinhala and Tamil languages. The special documentary programme produced by Sri Lanka Rupavahini Corporation and the speech of H. E. President Mahinda Rajapaksa, held in Anuradapura, were facilitated by the staff to be watched and listened by the gathered crowd to celebrate the 64 th Independence of Sri Lanka at the embassy.
The celebration ended up successfully after a buffet with delicious Sri Lankan foods prepared for Sri Lankan and German guests, who participated on this occasion.
09 th February, 2012.
EMBASSY OF SRI LANKA
NIKLASSTR. 19
14163 BERLIN, GERMANY