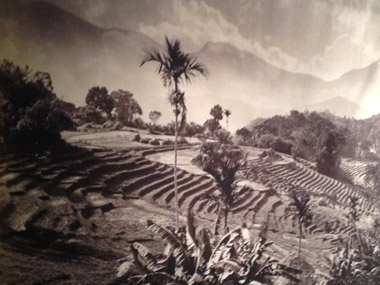 Even persons praised Ceylon, today’s Sri Lanka, who have never been there. The German writer Karl May, for instance, filled many pages with descriptions about the landscape of the mountains, tea plantations and the spectacular waterfalls, which he only knew from postcards. These photographs marked Ceylon’s image as the wild and romantic Arcadia in Europe at the turn of the century. The exhibition under the title Landscapes of Sri Lanka can be visited at Berlin’s Museum for Asian Art (Lansstr. 8, until 5 January).

Photographs of the landscape as well as working conditions were primarily of interest to the British colonial rulers. They wanted to document the progress that they brought to Ceylon. Therefore, apart from the peasants the colonial masters were photographed sitting in there pavilions, cut woods and the first railway lines. The photographers who worked in Ceylon at the time, among them William Skeen, Charles Thomas Scowen but also Hamburg-born Alfred William Amandus Plate, filled with their photographs soon also a market niche. It is for this reason that the photographs are so well preserved until today; some exist even in various versions.

In order not to disappoint the expectations of the Europeans, the photographs in 1870 already used tricks. Scowen used for his photograph Rice Fields two negatives that he put one over the other in order to obtain a more clouded sky and thus an especially tropic atmosphere. Also flora and fauna were popular motives; Europe had a yearning for the jungle, the tropical colour. That it would disappear forever through the ongoing colonisation can already be guessed on these photographs.

Back then, apart from the colonial masters mainly the photographers profited. They could afford large studios during the Ceylon boom. Some of them are even portrayed together with astonished locals, who carried their cameras with yoke of oxen.