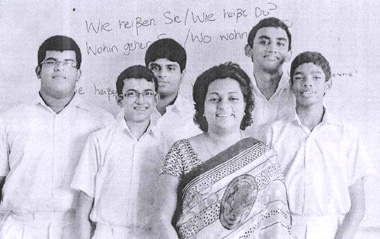 In their tidy white shirts and trousers, they are posing with their teacher in the far-away Sri Lanka in front of a board with German terms on it. When the five students of the S. Thomas College in Mount Lavinia will be landing on the airport in Frankfurt on Sunday, they will not only be taking warm winter clothes along, but also some knowledge of the language, in order to be able to talk with their exchange partners of the Gymnasium Isernhagen apart from English. This was made possible by Anusha Galage, who is fluent in German and actually working with the German Embassy in Sri Lanka's capital Colombo. She has offered to teach the exchange students some basic terms.

The young Singhalese and participants of the eigth exchange programme will be able to use their new language knowledge not only attending classes at the Gymnasium in Altwarmbüchen, but also during excursions to Hanover, Berlin and Hamburg. In the end of February, the boys will travel back to the island nation in the Indian Ociean. The German counter-visit is planned for the end of March. 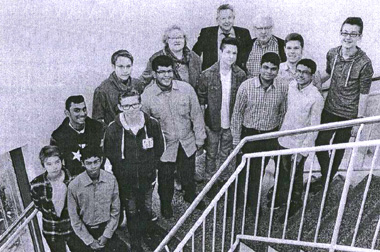 Sometimes the stereotypes are still right. "I want to see a lot of snow," the 16-years-old Singhalese Visura answered yesterday morning on the question, what he was looking forward to most during his visit to Germany. „Maybe a week of skiing in Carinthia should be included in the schedule," Mayor Arpad Bogya countered with a smile, when he welcomed the young people in the town hall.

However, it seems that Visura and his co-students from the tropical island nation of Sri Lanka will not make it to Austria during the coming weeks, but there still is an interesting programme with excursions to Berlin, Hamburg und Hanover for the exchange students of the Gymnasium Isernhagen. After their arrival at the airport in Frankfurt, they made their first experience with the difficulties of a rather strange language already. Problems with the ticket machine of the Deutsche Bahn could only be solved by telephone calls to Isernhagen and even to their capital Colombo. Train cancellations because of the well-observed detonation of a skyscraper in Frankfurt were also cause for delays. But now the exchange students have arrived well and are looking forward to many new impressions. Visura has already found some differences, for instance in the food. "It's not as spicy" as at home," the 16-years-old.

On the image, the young visitors from Sri Lanka are posing together with their German exchange partners, school principal Elke Wolf, Mayor Arpad Bogya and the teachers Manfred Möller and Florian Pini.

Both reports and images from the Nordhannoversche Zeitung