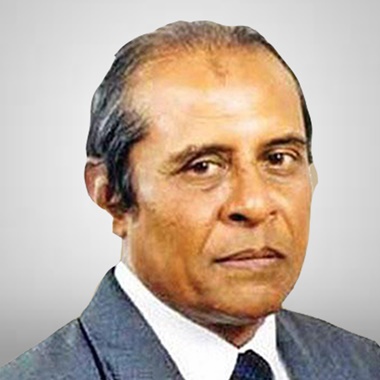 Tilak Marapana, PC, MP is a Sri Lankan lawyer. He is the current Minister of Foreign Affairs. He is a Member of Parliament Appointed from the national list and had served as Minister of Law and Order, Prison Reforms from September 2015 to November 2015. Earlier he was the Minister of Defence (2001 – 2003) and Minister of Transport, Highways and Aviation (2002 – 2004). He is the only non Presidential or Prime Ministerial holder of the portfolio of Defence. A lawyer by profession and a President’s Counsel, he had served as a government prosecutor in the Attorney General’s Department for twenty six years, serving as Solicitor General and Attorney General.

Mr. Marapana hails from Ratnapura, Sabaragamuwa, born in August 1942. He is the second son of former District Judge Mr. P. Marapana and has one brother Gamini Marapana, who is also a Presidents Counsel. He is an alumnus of S. Thomas’ College, Mount Lavinia. He has a degree in Chemistry and Maths as well as a Law degree.

Mr. Marapana is married to Stella. They have two sons, Janaka and Chamith both practicing lawyers. His wife is an Educationist with over 50 yrs service in the Education sector and is currently serving as the Member of the Public Performances Board.