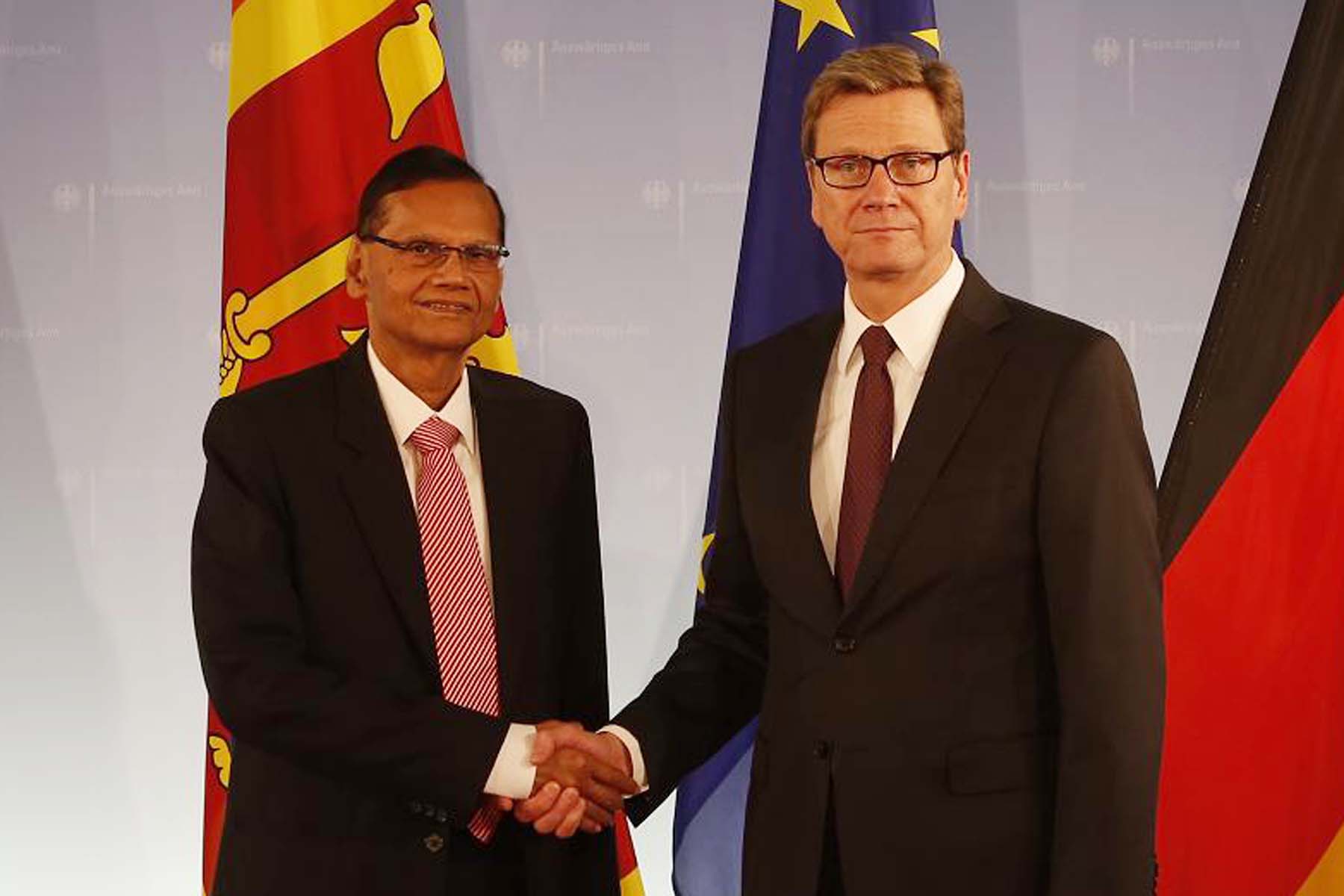 External Affairs Minister Professor G.L. Peiris, during his bilateral discussions in Berlin with Dr. Guido Westerwelle, Minister of Foreign Affairs of the Federal Republic of Germany, emphasized that conditions in Sri Lanka today are conducive to significant expansion of trade and investment relations between the two countries.  Germany, he pointed out, is the second largest investor from the European Union in Sri Lanka, a very significant source of tourism, and the largest source of grant and soft loan assistance from the European Union to Sri Lanka.  In these circumstances, it is important for Germany to be fully informed, Minister Peiris said, about current developments in Sri Lanka.

Prof. Peiris briefed his German counterpart in detail about the LLRC implementation process and said that the country is entitled to the space and time to move forward with a homegrown programme.

In their discussion of further scope for expansion of cooperation in the economic sphere, the Ministers focused explicitly on the Business Forum, to be held on the sidelines of CHOGM, as an ideal opportunity for this purpose.

Minister Peiris expressed appreciation of the action taken by the German Parliament (Bundestag) to defeat a recent Resolution critical of Sri Lanka.  He referred to the activity of several LTTE front organizations operating in Germany under the guise of community organizations.  In particular, he said that, according to information available to Sri Lankan authorities, there are a substantial number of schools operated in Germany by these groups for propaganda and fund raising purposes.  He urged the German authorities to keep a close watch on their activities in breach of the EU proscription.

Matters pertaining to the performance of German Foundations in Sri Lanka and recent developments in this regard, were raised by the German Minister.  Prof. Peiris, in response, explained the position of the Government of Sri Lanka in respect of these issues.

In his address at a largely attended meeting of the German Association for Foreign Policy (GDAP) in Berlin, Prof. Peiris raised several issues regarding recent trends in the Human Rights Council in relation to Sri Lanka.  He stressed the importance of an objective approach, and questioned whether this basic requirement is fulfilled in recent interventions.  He said that the Resolution in respect of Sri Lanka received hardly any support when it was brought by one country and, in fact, could not be proceeded with, but that the situation changed dramatically when the Resolution was moved by another country.

It is quite evident, he asserted, that voting patterns are determined by political, strategic and economic interests of countries in terms of their relationship with the mover of the Resolution, rather than a dispassionate consideration of issues relating to the country situation in question.  This is contrary, he said, to the intention of the General Assembly of the United Nations when it resolved to replace the Human Rights commission with the Human Rights Council, on the basis that the former was unduly politicized and, therefore, deficient in assessing situations on their merits.  Sri Lanka, he said, is happy to work with the international community on the footing of equality and partnership, but opposed judgmental and highly selective postures.