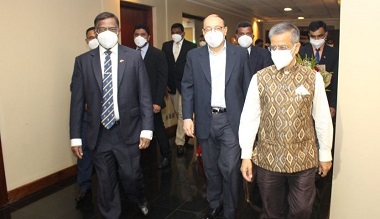 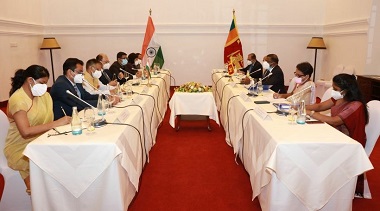 The Prime Minister's meeting at the Temple Trees was followed by an inauguration ceremony to virtually hand over 4 development projects funded by the Government of India. The Foreign Minister, Minister of Education, Minister of Plantation, State Minister for Estate Housing and Community Infrastructure, Minister of Health, Minister of Labour, Minister of Fisheries were also present at the inauguration ceremony of the development projects that includes the construction of a four-storied building at Saraswathy Central College, Pussellawa, an Auditorium in Wadamaratchy Ladies College, 1035 Gramashakthi Houses in Matale, Nuwara Eliya, Badulla, and Galle districts, and 24 houses in Menik Farm in Vavuniya district. 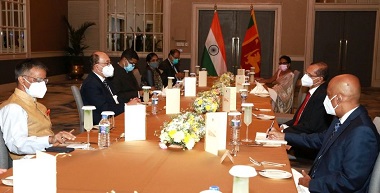 At the inauguration ceremony, the Foreign Minister underscored that people to people ties forms the most integral part of our relations and to that effect the first Buddhist pilgrims’ flight to Kushinagar which is scheduled to take place on 20 October 2021 will be a landmark in the India-Sri Lanka relations.  Foreign Secretary Shringla also emphasized that it was opportune for both countries to work on connectivity initiatives especially through the Buddhist Corridor with the new international airport in Kushinagar, India.

The Official bilateral talks between the Indian Foreign Secretary and the Sri Lankan Foreign Secretary were held at the Republic Building, Foreign Ministry on 04 October 2021 and covered a wide range of political, economic, security and cultural matters, in whichthe two countries share an interest. The Foreign Secretaries expressed their intention to continue the process of close consultations between the government. Bot sides acknowledged the importance of enhanding the connectivity between the two countries by all possible means, especially the sea connectivity through ferry services and increasing the air destinations, electricity grid, and digital connectivity. Among other topics, strengthening the strong cultural and civilizational bonds founded upon the Buddhist heritage was widely discussed.

The two parties agreed to continue the current momentum of deep engagement that reflects readiness to bring prosperity to the peoples of both countries, importantly bringing Indian businesses to invest in Economic Zones, especially in the pharmaceutical manufacturing and IT sectors, in Sri Lanka. Foreign Secretary Shringla also visited Kandy, Trincomalee, Jaffna, and culturally and bilaterally important places in Colombo including the Indian Peace Keeping Force Memorial during his stay in Sri Lanka.