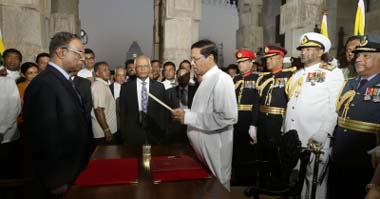 Maithripala Sirisena was sworn in as the 6th Executive President before Justice K. Sri Pawan at a ceremony held at the Independence Square in Colombo amidst the blessings of religious leaders.

It was a historic moment as the Leader of the opposition Ranil Wickremasinghe too was sworn in as Sri Lanka's Prime Minister before President Maithripala Sirisena. In his speech the new President said that during the period of this election the state media ignoring media ethics violated all election guidelines. He said that no other President would have encountered such character assassinations and mudslinging campaigns from state media as he did. He pointed out that a political culture should be set out to encompass the deep-rooted, well-established political traits that are characteristic of a society. The President emphasized that he would take all measures possible to fulfil the pledges given in the manifesto thus bringing prosperity among the nation.

Find the full article under http://www.news.lk/news/politics/item/5623-maithripala-sirisena-sworn-in-as-new-president-and-ranil-as-prime-minister