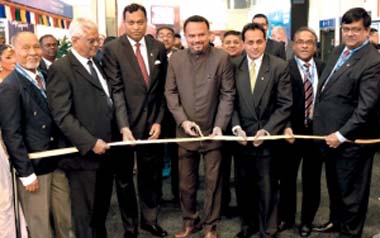 Sri Lanka is making a strong bid to be the host country of the ITB, the world's largest leisure exhibition in three years' time. This year the host country is Mongolia and the next year it's the Maldives. Tourism and Sports Minister Naveen Dissanayake addressing the opening ceremony of the ITB said that this will bring unprecedented publicity to Sri Lanka and it's a matter they are seriously considering. "We will make a bid." He also said that the Ministry would like to work jointly with the industry stake holders and he welcomes private public partnerships. "Transparency will also be a priority of the ministry which was something that was lacking hitherto.We will also take decisions in consultation with the industry stakeholders."

Sri Lanka's Ambassador in Germany, Karunatilaka Amunugama said the German market for the first time has gone over the six figure mark recording 102,977 arrivals for 2015. This was 71,642 in 2012 and 85,470 in 2013. "There has being a 20% growth year on year which makes Germany the highest growth market from Europe to Sri Lanka. This was followed by the US which saw and growth increase of 6.6%"

Find the full article under http://www.dailynews.lk/?q=business/lanka-bids-be-host-country-berlin-itb-3-years