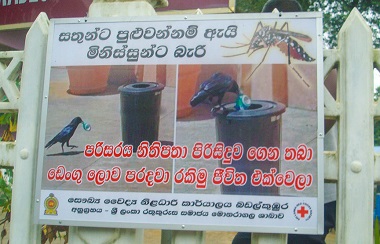 The Dengue Epidemic, that has become a concern in Sri Lanka for the past few months, has been successfully brought under control by the measures taken by the relevant government authorities and a collective effort of the general public alike, Sri Lanka Tourism confirms. Reported cases have dropped by 35-40% since mid-July according to the sources of Ministry of Health. Regular campaigns were implemented to educate the public and clean-up areas, and other preventive measures have been taking place to control the spreading of the disease under guidance and surveillance of the Ministry of Health of Sri Lanka.

Health Authorities are on alert and have issued precautions for the prevention of the disease. Therefore, there is no need to be alarmed or distressed over the situation anymore. Most cases have been reported from the Western Province, which has the highest population density of the country. The tourist hotspots and hotels in the suburban areas are not affected. Actions have been taken by the Ministry of Health, Nutrition and Indigenous Medicine under the guidance of Minister Hon. Dr. Rajitha Senarathne to improve the preventive and curative healthcare facilities to combat the current situation and strengthen preventative services.

Necessary steps have been taken to strengthen the Dengue Entomological and Disease surveillance systems in collaboration with the Epidemiology Unit and National Dengue Control Unit. Actions have been taken to provide all necessary drugs needed for Dengue patient management. Training of staff on clinical management and monitoring of Dengue patients, creating constant public awareness are some of the safety actions taken by the Ministry of Health, Nutrition and Indigenous Medicine regarding the matter.

Though the Western Province area was affected with the disease, it is under control now with the efforts of creating Dengue eradication and awareness programs. Colombo is now being cleared of garbage, and the cleaning of drainage systems are also taking place. In the Western Province, surveillances systems and disposal system have been implemented. Well-organized counter-productive measures are underway to create awareness of the causes of spread of dengue epidemic amongst the communities living in the suburbs of Western Province. This has helped in educating and engaging the households and communities, who are mostly affected, in the low income segment which includes keeping surroundings clean at all times, the prime cause of the spread of the disease.

The effects of recent floods which contributed to the spread of epidemic are being effectively attended to led by the state authorities with the required high level intervention in a sustainable manner to prevent recurrence of pollution through effective garbage disposal. The number of Dengue cases have decreased sharply by 40% since mid-July due to planned and systematic efforts by the respective state authorities in the recent weeks. Impact of dengue in other parts of the country other than Western Province have been minimal and continue to be under complete control and surveillance.

Tourists are seen to be freely moving around the country including in the city of Colombo. The Sri Lanka Tourism Authority is of the opinion that aggressive actions taken by the Health Ministry and the local authorities in the affected areas to arrest the situation have yielded results. Sri Lanka Tourism will continue to update the progress and is confident that there is no cause for alarm. Sri Lanka Tourism urges travellers to resort to correct sources of information to find out the latest updates on the disease such as Ministry of Health website and all Sri Lanka Missions abroad.